This opinion article was first published on CLUAS in December 2005

Have The Arctic Monkeys gone and peaked too early? 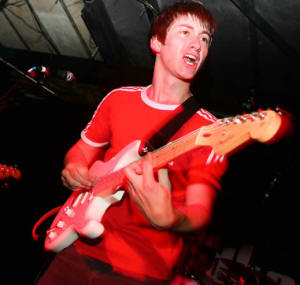 Una Mullaly, in her debut Op Ed, brings her trademark, tank-busting prose to the question, "Does bizarre chart success equal the end of an epoch that previously maintained its, well, let's face it, cool??

The majority of the music fed to the masses, sucks. It's watered down sufficiently to appeal to as many people as possible, in order to offend as few as possible, in order to shift as many units as possible, which is why most entries into the charts are offensive. Dance is "cheesy" (or worse still, "commercial", duh). Pop is dominated by boy bands, novelty songs, runners up in reality TV shows and 2-dimensional "stars".  Rock is bland and unadventurous. Hip Hop is boring and derivative. It is generally assumed that stupid people buy this music, or people with no taste, or people who don't care enough to have taste. That's fine, until the chart vortex - which smart musos delight in ignoring - sucks one of our own imploding stars into its murky cosmos.

In the latest instance, it is Artic Monkeys - a young indie group from Leeds who had released one slightly annoying, but catchy single ("Fake Tales Of San Francisco") before following it up with a rather rusty sounding "I Bet You Look Good On The Dance Floor".  The references were all there; it sounds like a bad Strokes B-side (that's good, right? Because effort is bad, right?), the lyrics checked robots, 1984, dance floor, and the live video was all very Spike Lee, or Jonze, or whatever you're having yourself.

"With the indie press rating, marketing and slating bands in a more zealous manner, the Monkeys will have to keep up the act..."
Next, there came an Internet campaign that Louis Walsh should take notes on; street teams, aggressive advertising, bombing message boards with Arctic propaganda. Lo and behold, the plot succeeded, and Arctic Monkeys achieved everything an indie band shouldn't want to: they got to number one.

Previously, this success might not have mattered. There are hundreds of indie bands who chart high, and then go on to being, well, indie bands. And they're welcomed back into the rock basements by the same old fans that were there before Top of The Pops sent an invite. But now, with the indie press rating, marketing and slating bands in a more zealous manner than even Smash Hits, the Monkeys will have to keep up the act because they embraced the machine. They took the NME front covers, they egged on their street team - kids who firmly believe they own a part of the band - to do their dirty work, they sold a bunch of singles, and like a boy band manager shovelling records into the boot of the car to get the lads to chart, Artic Monkeys got the punters out and came out on top. The problem being, they only have two songs to speak of, and now, the poor buggers will find it almost impossible to keep up that drive. Perhaps it will be the classic firework career, previously trademarked by The Bravery. Remember them? They supported U2 you know?