A review of their album 'The Libertines' 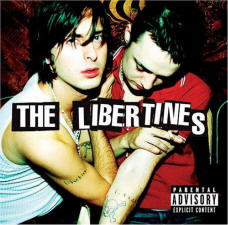 Review Snapshot:
The Mick Jones produced sophomore release by cockney favourites, The Libertines, is an intriguing listen but probably doesn't live up to the outrageous amount of hype that surrounded its release. All the same, the band stay true to the unique style and charm which cemented their position in the marketplace and in the hearts of their ever growing legion of fans.

Full Review:
The Libertines' eponymous second album is one which will reinforce their existing fan base but will do little to convert the non-believers. Musically they have grown little since their 2003 debut and those who have heard 'Up The Bracket' can expect more of the same. However, that's not such a bad thing as the band provide us with the same raw sound and quirky lyrics we are used to hearing from them.

Unfortunately, the album has come out under pretty unusual circumstances. Peter Doherty, the group's front man is temporarily (hopefully!) estranged from the band due to his well-publicised drug habit. Considering that one of the most endearing aspects to the Libertines is the amicable brotherly relationship between Carl and Pete it was interesting to see how the rift would play out on the album.

Colour me cynical, but it kind of seems that they have played on this negative publicity. For example the albums cover is a photo of Pete and Carl; blue eyed Carl gazing innocently at the camera and a pale, ghostlike Doherty looking down at his outstretched arm. Cynicism aside, anyone who was hoping for a warts and all glimpse into the emotional turmoil the band was going through at the time of writing and recording this album will not be disappointed. The albums first single was the mighty 'Can't Stand me Now' where Peter and Carl consider their possible demise, "have we enough to keep it together? / or do we just keep on pretending / and hope our luck is never ending".

So what about the rest of the album? Well, it opens with the aforementioned anthemic 'Can't stand me now' which is probably one, if not the best, song the Libertines have made to date. 'The Man Who Would Be King' is 'Tell the King' off the last album reworked, just nowhere near as good. The album ends touchingly with stand out track 'What Became Of The Likely Lads', which unfortunately could become be the bands swansong. "What became of the likely lads? / What became of the dreams we had? / What became of forever?/ We'll never know." There are quite a few fillers but some gems too like 'Music When The Lights Go Out', a tortured ode to falling out of love. Other highlights include 'What Katie Did', 'The Saga' and 'Arbeit Macht Frei'

This is a Libertines album for Libertines fans. If you liked 'Up the Bracket', you'll probably like this. If you didn't, spent your twenty quid elsewhere. My verdict is that this is an enjoyable album with a couple of stand out tracks. I guess it has to be respected that the band stayed true to their roots when they could have written an album about how (according to the NME) they're the saviours of rock and roll and how rubbish it is being famous. Instead they wrote an album about drugs and drink and girls and friends and London, thus not alienating their fans. Probably not quite as good as their debut, but still worth a listen. Hopefully it is not the last we will hear from a band with such talent and promise.