This opinion article was first published on CLUAS in January 2006

Buskers: Scourge or Saviours of our cities? 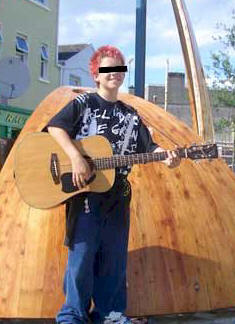 Aidan Curran knows which side of the fence he sits on when it comes to that often permanent feature on the modern urban landscape: buskers...

I hate buskers. Hate them, hate them, hate them. Can't stand them. Won't put up with them. Acoustic-guitar shouter on Grafton Street blocking me going into Bewleys? Get out of my way! Doddery old accordion fella on the Paris metro? Go off and do something productive like starting a riot! Half-naked cowboy guy in New York? Pull up your pants, you eejit!

In short, I'm not all that keen on people playing music in public places.

Which is not to say I hate street performance - in fact, I generally love it. Clowns, jugglers, mimes, fire-eaters, acrobats, dancers.... I could stand there until nightfall watching them, every pocket picked and it wouldn't bother me. However, I find roadworks more pleasing than buskers.

Nor am I down on freedom of expression - far from it. For example, I greatly admire someone like Aung San Suu Kyi, whose power to communicate and inspire transcends any threat a military junta can make. Yet if she were to celebrate her freedom of expression by whipping out the guitar and launching into 'Wonderwall' on the main street of Rangoon, I'd have no moral qualms in tipping off the nearest paddywagon.

Even using words like 'hate' troubles me greatly. Why, your correspondent is usually a virtual Statue of Liberty welcoming one and all regardless of beliefs, background or football team (except Liverpool fans, of course. Let's not get carried away here). I try to be scrupulously fair and rational like Atticus Finch before the bigoted jury, moral and upstanding like George Bailey battling mean old Mr Potter, loving 'not wisely but too well' like poor old Othello succumbing to Iago - but still something about buskers brings out the rabid dog in me. Why is this?

Well, first of all we have the question of quality. Quite reasonably to my mind, I don't like bad music - and buskers are generally dire. Let's face it; if they were any good they'd be in a venue charging us to hear them. But who would pay to hear someone roaring tunelessly while bashing an equally-tuneless acoustic guitar?

Secondly, they are hopelessly unoriginal - always the same old songs condemned to death by public execution, most notably Jeff Buckley's 'Hallelujah' (you may have noticed that it stopped being Leonard Cohen's 'Hallelujah' quite a few years ago). At Christmas we have amateur street choirs murdering good old 'Jingle Bells' for charity - and all year round we have repetitive buskers similarly depending on your tolerance, generosity and suspension of taste.

Finally, there is the implied superiority of busking (representing some sort of political act in defence of artistic integrity) over being, for instance, a Pop Idol wannabe - as if being a wannabe were a bad thing! Isn't the whole point of human existence to strive for better things, to transcend our circumstances, to shake up the old folks? Where does being a boring busker fit into this? We pay our pop stars to be motorcycle rebels and androgynous aliens and vampire supermodels, not to look like they just crawled out of the Rathmines bedsit next to mine. A performer should be someone who makes us say 'I want to be like them!', not 'I want them to be like me!' I think this is why I like the fire-eaters and acrobats - they show me something more exciting and glamorous than my own wet-Wednesday life. They seem individual, which is not at all the same thing as being authentic.

Yet buskers always gather crowds because there really are people who crave the comfort-food of the same old indie hits, who bow to the false gods of 'keep-it-real', who want to bring music down to their level. No need to name names here - we all know the glorified buskers in the charts and concert venues, playing the 'ironic' cover versions of chart hits they are too scared to admit they sincerely love.

So, there you have it. I hate buskers because they are the true public face of everything that's wrong with music today - the creative conservatism, the conformity of 'non-conformity', the hypocritical and wrong-headed glorification of authenticity over aspiration. Never mind your Crazy Frogs or your Pop Idols or your U2s. The real enemy isn't inside HMV - he's standing outside it.