This opinion article was first published on CLUAS in December 2004 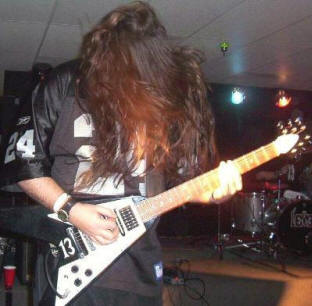 In the 4th CLUAS Opinion piece, Anna Murray shines some light on the vibrant Irish heavy metal scene of 2004...

As a nation of minstrels and planxties our respect and nostalgic soft-spot for a one-man singer/songwriter has kept generations of mellow artistes alive. Singer/songwriter syndrome has imbedded itself in the Irish music scene, with Damien Rice and Mundy becoming our musical spokesmen. However it seems the day of the man with a guitar singing of love and happiness is coming to an end, threatened to be uprooted by a darker movement which has wrapped its claws around the Irish underground. Make way for metal!

So we haven't had many famous metal bands. But over the last few decades our interpretation of what heavy metal is has changed drastically. In the seventies our little country produced a little band with a view to taking over the world. And take over the music world they did, for over ten years, leaving a legacy that has been etched into the fabric of rock music. The seventies' equivalent of today's idolisers of Queens of the Stone Age or Slipknot then worshipped at the altar of Thin Lizzy.

However, since the death of our rock hero Lynott, and Gary Moore's reversion to blues, Ireland's input has been to date as close to nil as the presence of Therapy? can bring us. Also from the time of Lizzy, attitudes have changed. Thin Lizzy are now considered more classic rock than metal, and have been replaced by Sepultura, or Korn, or Deftones as influences of our own bands. What self-respecting spike-junkie would sing today about moonlit dances and foxes called Johnny? Neither are the vocals as coherent as the sadly departed Phil Lynott's.

Our clean Irish rock has become heavy metal, with added black and red for effect. For every pop, rock, dance or country act we export another underground metal band, comes into being, nearly all original and nearly all influenced by non-Irish bands. Indeed there are no discernible Gaelic roots to metal, apart from the occasional Irish reference evident in the name of a band.

As attitudes change, so do images, and images convey attitudes. Metal is black, beautiful, sometimes morbid and always angry, and so must the image reflect this. For every teenybopper in the Emerald Isle today you see two budding spiked metallers. Aggressive music spoke the teenage angst of the early nineties with the advent of grunge and the subsequent surge in hard rock. Heavy metal and the crossbred punk and hardcore have always been popular, providing thousands of people, young and old, with release and catharsis. The Goth and metal image that people find so intimidating allows young people to express what they otherwise may not be able to in this society. Does the growth of hardcore communicate the anger of the youth of the noughties? Has the Celtic Tiger left a generation burned in its wake?

The Music Scene Ireland website currently has 47 registered metal bands, while www.metalireland.com lists a further 32 active in Ireland. Of course these are but a small proportion of the underground groups treading the scene in Ireland. Yet they are still largely ignored by the general populace. This lack of support from the public has led to the foundation of 'collectives' of these underground bands, with the view to pooling resources and arranging gigs. One such collective is the low-budget Aggressive Music Promotions (www.ampromotions.com) of west Mayo, who arrange gigs for local original metal bands. Their all-day festivals, which regularly take place with local and international bands, marked a huge departure from the ceili band sessions we so love.

Their fame grows and grows. Some of these bands follow their reputation as it spreads across the country. ShermanM4, a group from Castlebar and founding members of AMPromotions, boast signatures from people in all corners of this country on their guestbook at www.shermanm4.com (and even more than a few apparently from Mars). ShermanM4 are also currently recording a demo, which they hope to have on CD soon.

The job of these collectives is being made increasingly more difficult, as the plague of money-minded venue managers spreads across the country. There are excruciatingly few venues which will allow an original heavy metal or hardcore band to play, and those that do pay little or no money whatsoever. However the scene will not be repressed, always finding a sweating, and dismal alcoves of dark and damp pubs in which to play for their ever-hungry, seething audience. Heavy groups such as these are thought to drive away customers rather than bring in so many loyal fans. The movement is becoming impossible to gain access to. Perhaps it is this element of rarity that has attracted those cynics of the mainstream to those repulsed by the few groups whose control is choking the opportunity for diversity in our music scene.

It is more likely that we good-natured Irish folk have become sick of what we see every day. Mayhap our genial nature has left us vulnerable as the world expands, and we have been burned too often. Maybe our beliefs and hopes have been crushed one too many times, with the world pumping us full of false ideals and making us what it wants us to be. It is no wonder we need a break, need an alternative, something to lose ourselves in. Metal and hardcore is no longer just for the leathered and spiked posers of the seventies and eighties, it is for every man and woman with something to say, and it seems we have a lot to say.