This opinion article was first published on CLUAS in June 2005

Kiss That Frog: Ring tones and the music industry 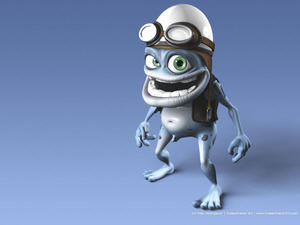 Brian Farrelly considers the lessons to learnt as the latest in a long line of amphibious stars hops to the Top of the Pops...

It has run the full gamut of description: from the ultimate marketing coup to the end of music as we know it, a ring tone has crossed over to top the singles chart. This has prompted a collective scratching of heads, much comment on the thirty million spent promoting it and general sympathy for Coldplay, who lost out in the race for the top spot. But before we all run out to buy Coldplay's next single to right this abhorrence, should we really be surprised that the music industry is more comfortable doing business without an artist?

Going right back to the nascent days of popular music, the artist was a mere passenger in the process of making money. People bought the score of popular music heard on the radio so that it could be played and sung along to on home pianos. Tin Pan Alley thrived and the publishing house was king. Indeed, it was the fifties before the concept of a Hit Parade emerged and it was at this time that the record companies gained their strangle hold on the industry, with teams of tunesmiths (Neil Sedaka, Carol King, Neil Diamond, The Brill Building) churning out songs for a constant rotation of increasingly dispensable singers. Even with the advent of the likes of the Beatles and Stones writing their own material, the zenith of music industry power over the artist was The Archies, a cartoon group who had a worldwide hit with Sugar Sugar. Right up to recent times: Milli Vanilli, Stock, Aitken and Waterman - the artists mere puppets.


"In essence, having no artist is just the way the industry would like it..."

In essence, having no artist is just the way the industry would like it. After all, the artist is the only variable in the equation. The song never ends up knee deep in cocaine and hookers. The song never checks out on the john with a cheeseburger close by. Put yourself in the shoes of the hard-nosed record company exec whose raison d'etre is to return profits - who would you put you marketing millions into, a couple of dancers miming The Birdie Song or Pete Doherty?

So, what does The Crazy Frog really tell us (other than record companies have and always will follow the path of least resistance to profit without a care for artist, artistic integrity and musical quality)? Well, it speaks volumes about the impact of technology on music. How can a ring tone become so popular? Simple. It is because mobile phones are ubiquitous and very personal devices. A ring tone says something about the owner. It says 'This is what I like' in an immensely public manner. Ring tones are now the ultimate indication of a song's popularity (albeit transient, teenagers change ring tones more than their underwear). Forget single sales, forget download lists, ring tone charts are the true arbiter of disposable, popular music.

"The smart move would be for artists to distribute ring tones of their music free of charge..."

And while we all despair of The Crazy Frog, it should be regarded as all that it is, nothing more than the novelty to be consigned to the rubbish bin of history along with other musical detritus like Mister Blobby and Weird Al Yankovic. Its triteness masks the real story here - as a medium to distribute music, the ring tone should be taken very seriously, particularly given that within a year, 'real tones' (MP3 quality ring tones), will be standard on all mobiles. Whilst the faceless corporations, hiding behind cartoon frogs and chickens, will try to rape it for all the money making openings possible, artists should see opportunity in this technology. After all, despite the doom-mongering of Lars Ulrich, MP3 didn't kill the music industry. While the industry was busy closing down Napster, artists successfully began to distribute their music independently using MP3 and the internet. The smart move would be for artists to distribute ring tones of their music free of charge, encouraging phone users to forward it to their friends and (much as it pains me to use this phrase) generate their own viral marketing. It is only a matter of time before a serious artist subverts this technology for their own needs and makes a breakthrough from this most unlikely of sources.

I leave you with this thought. If Blue Monday by New Order had started life as a ring tone rather than a twelve inch, would it be any less of a masterful piece of music? Maybe the Crazy Frog isn't so crazy after all....