This opinion article was first published on CLUAS in March 2005

The Scene Around Here... 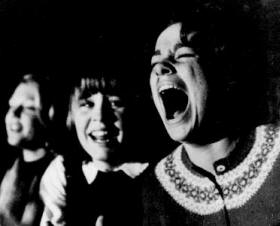 In his first CLUAS Opinion piece Daragh Murray offers his view that it's not the tunes or bands on the Irish scene that have suddenly lost their passion but it's the gig-going public that have changed. A demanding audience is as crucial to a thriving music scene as talented musicians. And maybe it is even more important. Take it away Daragh...

Some say that rock music, at least rock music with the balls to look you in the eye and force a sigh, is dead and gone. They claim that it died on a couch with Sid Vicious, in a lonely hotel room with Janis, growing cold in a bath with Jim Morrison or twitching on a puke-stained bed with Bonzo Bonham.

Never mind the bollocks. Rock music never died, it's still alive and kicking, still got that primeval power, the ability to loosen up a square and make a drunk man high. Sure there's a lot of stuff polluting the air waves, but hell, the Osmonds were number one while Zeppelin rampaged through America, stopping only for a quick snort and a little red snapper fun. The Ramones and The Sex Pistols were spitting out a new social phenomenon while Disco was going up its own nose in Studio 54. Simply Red was riding high in the charts while the Stone Roses released a work of unparalleled beauty.

It's not that, in Ireland, the tunes or the bands have suddenly lost their passion. It's that we, the gig going public, have changed. We go to a gig demanding to be entertained, expecting nothing, and contributing even less. The air is rife with cynicism, stale with heavy pseudo-intellectual-all-knowing arrogance. Bands are written off with flippant one-liners, singers are scorned for being over the top, or derided for being stand-offish, and always, inescapably, someone will talk about the 'good old days.'

The truth is that while music defines a scene, it doesn't make it.

In the 50s it was the breaking down of former social norms as a new wave, heralded by the end of the war, and soundtracked by the electric blues of artists such as Chuck Berry and Muddy Waters, that lured teenagers away from the diners and drive-ins and into the sweaty excess of the juke joint. In the 60s it was taken a step further, made 'hip'. Bobby Dylan came to New York, revitalised the 4th street folk scene, and then turned it on its ear in a glorious maelstrom of electric guitars, out of place organs, and amphetamine psychosis poetry. The Beatles started the 'British Invasion' by making the leap from the Cavern to Shea Stadium and forging a path for bands such as the Animals, the Kinks, the Who and the Rolling Stones.

In San Francisco a strange new sound emerged. It was a sound forged at Ken Kesey's acid tests, in low rent apartments around Haight-Ashbury, in the furthest reaches of minds newly opened to the lysergic experience and made aural by The Jefferson Airplane, the Grateful Dead, Big Brother & the Holding Company, and the New Riders of the Purple Sage. Just a few hours drive down the coast, Los Angeles gave us the intricate wonders of Love, and the sheer awesomeness that was the Doors. Back in England, Carnaby Street threw up the Sex Pistols while the slums of Manchester offered up the Stone Roses and the Happy Mondays, steaming warehouses and nights that stretched long past dawn. None of these bands just appeared like manna from heaven, they came from a 'scene', be it the cotton fields, Chicago, Hamburg, Haight-Ashbury, the Whiskey, the Factory or the famed Dandelion Market. It was a ground swell of interest, an eager fan base and a vibrant happening that gave these bands their voice, forged their identity, let them go onto greatness.

It is this scene that we are missing today in Dublin. Maybe we need a new drug, but I don't think that's strictly necessary. As cliché as it sounds, good music is as powerful drug as any and a hell of a lot less hassle to get hold of. People just need to find 'that tune' the one that will always bring a smile to your face and knock you back with its beauty. For me it's Santana's 'Samba Pa Ti,' the suspense when that first crescendo never quite makes it, and the sheer orgasmic wonder when it finally breaks through and that organ starts to wail. Maybe I'm performing below par between the sheets, or maybe it is just that good. And there isn't any single tune. Beauty can be found in way too many songs to name, in the way Caleb Followill rumbles his voice, in the rigid structure of the Strokes or most importantly in the live presence of an unknown band getting turned on in a crappy venue every weekend of the year.

People will always put out good songs, the odds are in our favour there, but it's the gigs that force tunes into perspective and make them great. It's the gigs that get bands signed. How many times have you heard an album, only to have a band turn it on its head at a gig and infuse it with a whole new meaning? One of the best gigs I've ever been to was the Strokes at the Olympia, not my favourite band by any means, but all out madness. Pure Jack Daniels, heaving bodies, sweaty, balls out rock and roll.

Take a look around you next time you go to a gig in Eamon Doran's, the Hub, Voodoo Lounge or any of the other venues around town. Take a look at how many people are there to be cool, and just remember, that cool is overrated, cool people idolise the freaks, the nuts, the outcasts. F**k 'em all.

Let your hair down, take another drink, and let go.