Review of (yet another) greatest hits album, this time it's called '40 Licks' 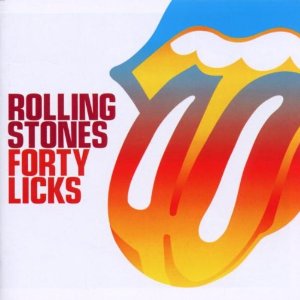 In the rudest wake up call to the rock world since punk music, John Strausbaugh writes in his Rock Till You Drop book "Rock simply should not be played by fifty-five-year-old men with triple chins wearing bad wig hats, pretending still to be excited about playing songs they wrote thirty or thirty-five years ago and have played some thousands of times since. Its prime audience should not be middle-aged, balding, jelly-bellied dads who've brought along their wives and kids?That is not rock 'n' roll."

The Rolling Stones, writes Strausbaugh, are only the most obvious, and perhaps depressing, example of a once-great rock band that kept playing years and years after they'd gotten too old. The band has gone from the greatest rock n' roll band in the world to the greatest self-parody of a rock 'n' roll band. "The Rolling Stones didn't make rock anymore after the mid-'70s; they made stadium events" writes Strausbaugh, Editor of the weekly Manhattan 'New York Press'.

The band that proclaimed itself "The Greatest Rock & Roll Band in the World" has long since represented rock's most overarching confluence of art and commerce (with a distinct emphasis on the latter in recent decades). This is the first anthology to gather hits from the band's entire career, covering the carefully  cultivated bad boy image (promoted when their Beatles competitor plans didn't work out) through to the days of real excess, artistic highs and lows and the final descent into a Las Vegas spectacle act.

The arch of Rolling Stonery, as represented on this CD collection, loops from '50s rock and R&B revivalism of 'Not Fade Away' and 'The Last Time' to the aggressive anti-Teddy Boy drive of 'Satisfaction', 'Get Off My Cloud' and '19th Nervous Breakdown' onwards and down to the proto-goth 'Paint It Black', 'Have You Seen Your Mother Baby' and then to  psychedelic-tinge of tracks such as 'She's a Rainbow' and 'Ruby Tuesday'. The loop ends in the blues cock-rockery of 'Street Fighting Man' and 'Jumpin' Jack Flash'. The rest of the Stones career, not represented here, was spent largely recycling themselves.

The second disk, the post-1969 material, carries 'Start Me Up', 'Brown Sugar', 'Miss You', and 'It's Only Rock and Roll'. The Stones of course dropped to the nadirs of their collective career in the period covered by this second disk (Jagger actually managed to produce better solo material) with the band attempting to compete with young bands and re-interpret modern sounds. The nineties songs here even tilt at fitting into the prevailing alternative groove, a distasteful failure and an embarrassment for a rock band with the Rolling Stones' style pedigree. Nonetheless 'Don't Stop' is the best of the new songs on this collection, a pretty robust pop-rocker but no better than other post?eighties singles like 'Some Girls'. Case closed: the Stones are a fond memory of another age, they just don't cut it in the modern world.

The Stones are trying to keep up with the times musically but the result is transparently awkward and artificial. Mick Jagger's voice is made for the Stones' original brand of energetic blues-influenced music, not more contemporary sounds. Fans attend their big-bucks concerts and buy collections like this for the old tunes. Indeed the Stones really haven't produced anything of their worth in the past two decades but they don't seem bothered. Clever marketing of collections like these to a younger audience awed by the Stones reputation will feed the greedy corporate beast (hey I should know, I've too been marketed to successfully by the nostalgia merchandising machine. I bought the album didn't I?!)

It was not the Stones but The Who who captured the zeitgeist of the 1960s and early 70s when rock and rebellion went arm in arm: 'I hope I die before I get old'. But Pete Townshend didn't live up to his word. He and many of his rebel icon peers preferred to limp on and play the same songs the same way as they did as young rebels. The Rolling Stones were self-appointed leaders of a generation of world-changers and ended up devoid of the ideals that were the genesis of their art. Bruce Springsteen and Bob Dylan may not be teen rockers but their music acknowledges and reflects their age. The Stones attempt to make the music of the young gods they were forty years ago, wearing the same clothes and stage grins they did back then. As Bruce or Bob might say, it just ain't natural.

Keith Richards perhaps speaks for the entire project with his close to proceedings, the half-decent barroom lament 'Losing My Touch'. The Rolling Stones have been losing their touch for quite a while and should have gone when the going was good.

On top of this we didn't need this album: Hot Rocks was a more than adequate greatest hits collection. But back again to John Strausbaugh "?by the 1990s, the Stones' brand of colostomy rock had become not an isolated freak show but a regular - and popular - feature of the summer concert season. They have become their own nostalgia merchandise. There can be only one motivation? All You Need Is Cash."