A review of their album 'Is This It?' 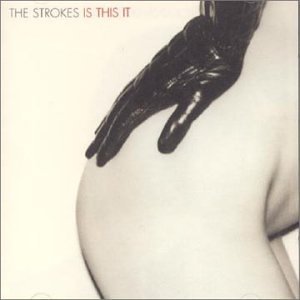 "The future of rock and roll". That's one of the less grand descriptions of The Strokes that's been blurted out recently by some gibbering music hack. If you've missed the hype, let's just say that (along with Detroit's White Stripes) there's been a collective knicker wetting on a Niagara Falls scale over this 5 piece from NYC. Is it justified? Well, probably.

OK. Let's start with the look. Imagine if you will that you have been living in a New York sewer. You have with you your rusty instrument and a soul moulded in the rock'n'roll ideal. You thieve scraps of food from passing rodents and have long since finished tunneling into a nearby drugstore to access the necessary chemical enhancement. Daylight frightens you. After several months of this existence you have the look of a Stroke. You are a rock and roll fugitive and your own mother would have you arrested for trespassing on finding you at her front door. Yes, they look that good.

Reassuringly they've got a sound to match, of stripped down, greyhound lean, no bullshit guitars and drums, dripping with NYC cool. It is a joyously uncluttered sound. Think Teenage Kicks (without the tank-tops). Think power and passion.

The opener, and title track, is merely a loosener for an album that is searingly and unrelentlessly paced. 'The Modern Age' follows, bringing visions of a new millennium Jam not just merely covering The Kinks' 'David Watts' but melting it down and fashioning something brutally new. It's a nod to the mod that is repeated elsewhere, particularly on 'Someday'. The VU influence is obvious and absolutely necessary, but to stop there would be to stay in the realm of the bleedin' obvious.

Tracks such as 'Soma', 'Barely Legal' and 'Hard To Explain' are infectiously catchy rock/pop crossovers (?la Blondie) displaying a fine marriage of punk aggression and a stylish mod sensibility. It keeps their sound this side of meaningless thrash but out of the reach of Saturday morning TV. Chuck in a nice'n'sleazy production job (perfectly suited to Casablanca's vocal Iggyisms) and you're left with the feel of a live recording. It's bar room, pay for your beer, then get the hell out - you can almost smell and feel the sweat.

The closing track 'Take It Or Leave It' is perhaps the highlight, a blistering statement of band intent and ethos that's no parting shot but more of an indiscriminate straffing of anyone in the vicinity.

It's a startling debut and they might struggle to follow it. At present, it's not a sound that will transfer readily to the big stage, which is where they are undoubtedly heading. But, Take It Or Leave It? Most definitely opt for the former.