Johnny Hallyday & Serge Gainsbourg back in the news? Aidan's on the case...

Two of France's biggest rock icons are experiencing contrasting fortunes at the moment.

Johnny Hallyday, that glorified Elvis impersonator you may have seen in your French schoolbooks, is suffering a sustained public backlash from even his most dedicated fans.

You see, France's number one rock star wants to become a Belgian.

The news of his citizenship application has caused 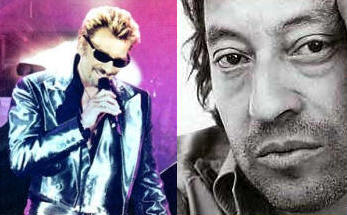 ructions here. Despite his family ties to Belgium (his father was Belgian), most commentators have pointed to its more generous tax system, noted Hallyday's lucrative new record deal, and have (like Johnny's accountant, no doubt) put two and two together.

The French media, sensing weakness, are tirelessly probing his private life, especially rape allegations which were recently thrown out of court. Meanwhile, his PR team is relentlessly pushing his family - especially recently-adopted Asian baby daughter - into the spotlight in a mad scramble for positive publicity. His die-hard fans are simply upset that their idol, the self-styled rocker-of-the-people they made into a star, is upping sticks to a country traditionally the butt of French jokes. Tough times indeed for poor old Johnny.

The late Serge Gainsbourg, by contrast, is about to enjoy renewed exposure and acclaim in the English-speaking pop world with the release on 27 February of 'Monsieur Gainsbourg Revisited', a tribute album to mark the 15th anniversary of the death of a true French pop/rock genius. A star-studded, eclectic and ultra-hip line-up includes Franz Ferdinand, Portishead, Michael Stipe, Tricky, Jarvis Cocker and Marianne Faithfull, all singing English-language versions of his songs. With such marquee names on board, the project is sure to generate huge interest in the man and his work.

You must be joking.