Review of their collection 'Hits' 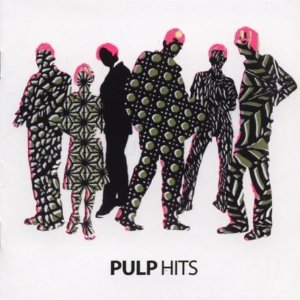 'Forever focused, compelling, confrontational, still toying with the unconventional. That's Pulp. The band that manages to combine melody and malady more smoothly and effectively than most others this side of Morrissey and the Smiths. Unlike several half-cooked bands who've pushed a greatest hits collection on us (or had it pushed on them and us by corporate suits trying to maximise cash in-take) Pulp are well due the Best Of treatment. And they've plenty of grade A material to fill such a record.

There's two albums worth of song on the Best Of cd. A quick run through the collection gives one the hint that Jarvis Cocker's outfit could have derived its pop structure from the Beach Boys, guitars from anyone (the technical details are always accomplished but secondary in a Pulp project) and lyrics of everyday, moody reality from the Smiths and Suede. Amid the tastefully arranged strings and the elegant pastiche of genres, there's all the pessimism and nihilism of grunge bands in Pulp songs but positivity and spirituality surface too in an average Pulp song text. The lyrics are at once sensitive, dramatic, and tragic, but so entertaining that even the anal-retentive could lose themselves in the sheer buzz of it all.

When all else fails, sheer power and dazzling showmanship have always been Cocker's saving graces as this outfit pushed on nearly two decades of music making. Brilliant and flawed, honest and real, Pulp have produced many a jewel.

'Sorted for E's and Whizz' and 'Underwear' lead the charge but are dwarfed by the latter's twin 'Common People'. Pulp's twin defining moments are the era-defining latter and the day they made gangly, geeky, loud-mouth genius Jarvis Cocker front man. There's no such thing as bad publicity, as Cocker has endlessly proven. In the band's most barren days, Cocker kept them in the headlines. Still, Pulp's years spent skulking rather happily in indie-land produced some fine and some mediocre songs.

Pulp's primary lyrical obsession and muse subject is sex. It surfaces on most of the tracks, but particularly on 'Babies', 'Razzmatazz' (possibly the band's single ever), 'LipGloss' and 'DYRTFT'. These tunes are so damn dirty they're almost pornographic. The songs all start off low key before rising to a crescendo and coming back down. Then onto class wars with 'Common People', raves with 'Sorted', and young love in 'Disco 2000' and 'Something Changed'. These are the songs that broke Pulp and once they're out of the way, it's back to sex, geriatrics, porn, and absent fathers. 'This is indeed Hardcore'. This fat, gooey slice of Pulp sits incongruously beside 'The Trees' and 'Sunrise', dotty little ecologists' bonding tunes by comparison.

There's been some questions about the future, or lack of, for Pulp. The only hint of an answer lies in 'Last Day of the Miners' Strike'. The song sets a depressive tone, laden with much doom an gloom. But its also one of the band's best crafted songs of Pulp's entire career, a powerful political point-maker. So the inspiration and the ability is certainly there, whatever the darkness or the willingness to go on. The slow burning beauty of Pulp's songs often have more effect and resonance than the angrier, pushier style of the Manic Street Preachers. "...Some joker with a headband is getting chicks for free" could be a swipe at Springsteen or Straits. Ironic if it is: take off the Cockney accent and this song would fit snugly on Springsteen's 'Nebraska' or 'Tom Joad' albums. On this song Cocker is almost cinematic in his portrayal of the heady greed and angst of the eighties causing this reviewer to regret that Pulp don't write more overtly political material. Common People is of course a masterpiece in politicking but many of the snobs who boogey to the tune at cricket club discos and Met Club bashes hardly cop the message.

"The future's ours for the taking now / if we just stick together" Cocker sings on 'Last Day of the Miners' Strike'. Let's hope they manage.