It was a much-anticipated return for Massive Attack, who brought their large scale '100th Window' tour to Sydney, back after a 5-year absence. The controversy, surrounding drug and child pornography charges (which has since been dropped) against Robert '3-D' del Naja, Massive Attack's front man, did not overshadow the show and he started off by dismissing them as bullshit, to cheers from the audience. 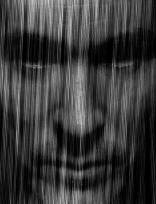 The opening songs were taken from the band's latest release 100th Window and del Naja's vocals sounded strong on 'Future Proof', echoing out over the electronic heartbeat of the synthesizer, which built up slowly to its powerful crescendo. There were loud cheers when 'Daddy G' Marshall appeared to add his unique musical talents to 'Risingson' from their penultimate album 'Mezzanine'. Regular contributor Horace Andy's deep, resonant voice added weight and integrity to 'Everywhen', 'Angel' and 'Name Taken'. 'Hymn of the Big Wheel' produced a huge response, the audience seeming a little relieved to hear one of their favourites from their debut album 'Blue Lines'.

Unfortunately guest singer Dot Alison, a well known performer in her own right, just didn't have the vocal range for songs such as 'Teardrop' and though she competently carried the songs "Black Milk" and "Special Cases", Sinead O'Connor's distinctive, haunting voice was missed. "Safe from Harm" featuring Deborah Millar was also a big hit with a pretty lacklustre crowd, who were fairly subdued throughout. Notably absent were their other hits "Karmacoma" and "Protection" though as this was a promotional tour for '100th Window', not a greatest hits tour, it was to be expected.

The concert didn't sell out but they did have over 7,000 fans lending their support. Unfortunately the choice of venue was one major disappointment for the night, the cavernous Entertainment Centre not suiting their intimate style of music and with no big screens showing the action on stage, the performers looked miniscule from our seats near the back. It also proved a problem when the crowd, perhaps restless eager to hear the more popular songs from the group, left their seats and moved up and down the aisles sometimes chased by over eager ushers.

The light and computer show was spectacular and along with green strobe lights and blinding white flashes of light from the sides of the stage there was a giant LED screen at the back constantly updating - a league table of military spending, the cost of weaponry and nuclear armaments, stock exchange rates and headlines from around the world were all rapidly punched out across the screen. Given the current political climate and del Naja's very public involvement in the anti-war movement it added the necessary sombre backdrop for a concert played out on the cusp of war. They ended their set with a rousing "Unfinished Sympathy" followed by "Group 4" showcasing the talents of all the performers in one climactic finale.

General reaction to the concert seems to be as divided as the response to their latest album. Ranging from comments of genius to disappointing the expansive '100th Window' production was not to everyone's liking. My advice to fans heading to Marley Park in July is to listen to 'Mezzanine' and '100th Window' on repeat, get up as close as possible to the front and get swept away by the music. It promises to be a unique experience and will be totally unforgettable if Sinead O'Connor is there to add her spine-tingling vocals.