A review of her album 'Throw Down Your Arms' 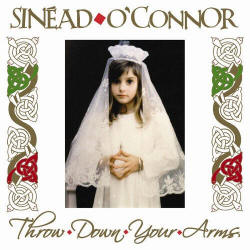 Review Snapshot: While on her hols in Jamaica, our Sinead explores her Rastafarian beliefs via covers of old reggae standards. Your tour guides will be Sly and Robbie. No need to fasten your seatbelts, as this will be a VERY sedate and comfortable ride...

Full Review:
Sinead O'Connor's latest release - versions of Rastafarian standards, produced by the reggae dream team of Sly and Robbie - features her Holy Communion picture on the cover and tells in the liner notes of her struggle between organised religion and individual belief.

In a different sense, 'for the love of God' may well be how reggae purists react to it. Certainly, her impeccably-pronounced pidgin-English and the sleevenote credit to 'Sly Dumbar' give the impression of dilettante genre-tourism and ambience-chasing. First trad Irish (her 2002 'Sean-N? Nua' album), now trad Jamaican - perhaps next month trad Australian with layers of synthesised didgeridoo overdubs?

This would be unfair, though, as anyone who has listened to Sinead's recent records ('Faith and Courage' from 2000, for instance) will have heard a consistent reggae influence. There's no doubting Sinead's sincerity in contemplative songs like 'Ja Nuh Dead' or 'He Prayed', and she sounds positively playful on 'Curly Locks'. And to be fair, the lady herself is the first to say (in the liner notes) that the originals can't be bettered.

However, it's all a wee bit too comfortable. Even this most passionate and fiery of singers sounds strangely sedate with the political lyrics of 'Marcus Garvey' or 'Downpressor Man'. And that marvellous voice is kept in check throughout the album - never letting rip or taking flight. A good time was obviously had by all, but on the aural evidence no-one seemed to be pushing themselves too much.

So, 'Throw Down Your Arms' is a warm and likeable reggae sampler put together by a trio of talented artists, nothing more or less.