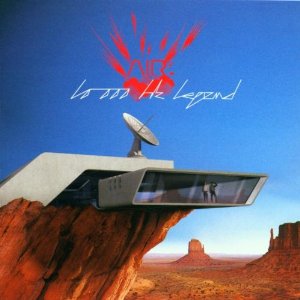 I'm not sure, maybe it's something in the aligning of the planets, but things have become mighty strange around these parts since this album came in.

I smiled at the idea of hearing the new Air album having heard their earlier stuff over the past year or so. I laughed when I heard the second song (they've composed a lyrical journey with a Stephen Hawking-like voice box) and then I sat dumbfounded as I realised that the words on the track (being sung almost comically) are absolutely wonderfully written.

So I had to start the album again, this time I stopped playing 'Championship Manager 00/01' and focused on the material.

10,000 Hz Legend is clearly a bold departure from the Moon Safari days. Less streamlined tunes, much bolder sound, and a seemingly unending supply of ways to record this. But what seems to have happened is that Air have been somewhat reluctant to take any really bold steps, and by doing this they have also limited their wonderful talent for writing melodies. True, I think this is a good album, very good in fact, but I can't help but feel that it could have been so much more - like a champion runner that fell before the finish line.

But maybe that's just me, and maybe this just needs a little more time to become acquainted with. We'll see.

Keith is the Content Manager of Galway.com, a lifestyle resource for the West of Ireland