Their album 'Super Extra Bonus Party' was the winner for 2007...

Super Extra Bonus Party answers below questions CLUAS put to all 10 acts nominated for the 2007 Choice Music Award. Check out the answers from the other acts up for this year's award. 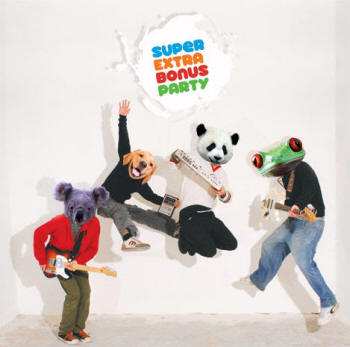 Give us a little synopsis of about how this album came about and what was it like writing and recording it?
Well, 75 million years ago we were basically sent by that fella Xenu from outer space and we've been recording the album in our kitchen ever since. Apart from the odd bit of cabin fever, it's been a slow but smooth ride.

How do you feel about the idea of music awards in general?
Brillo Pads. Music awards are my fav! LOL!

Do you feel winning the award will enhance your career?
Most probs. Julie Feeney did alright, but Neil Hannon did get dropped. Overall it'd be bleedin' rapid though.

Your favourite album from those also nominated for the Prize?
Dry County's "Unexpected Falls" is an aural smorgasboard of wham bars and stingers.

Do you think the idea of the album is a little antiquated in these days of single track downloading and plummeting CD sales?
Maybe in marketing terms, and for big fat bastard record labels who light cigars off of babies heads. But for the true muso, I reckon the album is still an admirable yardstick.

Do you feel the Irish music scene is in a healthy state at the moment?
Definitely. Lots of stuff has been overlooked by the meteors and the choice, and there are a million cool scenes beyond the indie/guitar based ones.

How are changes in technology influencing how you record, distribute or publicise your music?
Well since the advent of the steam engine in the 1800's we've been able to get our shit right around the canal network that spans the country. The dawn of the metal incandescent light bulb in the 1920's means we can fiddle with our knobs after dark too!!