Her album 'Tales of Silverleeve' was nominated for the award...

Cathy Davey answers below questions CLUAS put to all 10 acts nominated for the 2007 Choice Music Award. Check out the answers from the other acts up for this year's award. 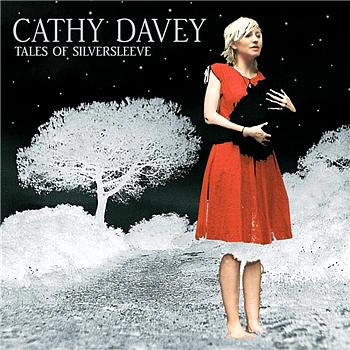 Give us a little synopsis of about how this album came about and what was it like writing and recording it?
i spent a long time on this album. I was determined to keep as much of my home recordings as possible and when re-recording parts it was of equal importance not to be anywhere that felt "professional". For some reason I never overcame the red light fever so recording in my house or a rented house or even my dad's house helped me forget that I was actually committing to tape. The killer of happy recording in my case. It may have suffered sonically as a result but the warmth you get from the sound of a kettle boiling or a chicken roasting in the background just does it for me. The more proof of life in recordings the better.
Writing the album.... There were so many phases. Spurts of songs and stretches of rubbish but I reckon that will always be the case. If too many songs come easily I will start to doubt my standards.

How do you feel about the idea of music awards in general?
I haven't decided yet. It's too confusing trying to figure out how it effects your confidence and in turn what drives you to write songs. I'm not convinced awards are good for most artists, and I'll bet it's a struggle for those who win loads of them to gain perspective come the next album. But sure, recognition is nice.

Do you feel winning the award will enhance your career?
Ah! I try to pretend it's not a career! Otherwise it's all numbers, stats and docket type stuff. I fell into music blissfully ignorant and although it got me into trouble I keeps me from going mad....

Your favourite album from those also nominated for the Prize?
It would be rude to say.

Do you think the idea of the album is a little antiquated in these days of single track downloading and plummeting CD sales?
We should bring back cassette tape. Getting to love an album (including the boring ones) because you couldn't be arsed fast forwarding.

Do you feel the Irish music scene is in a healthy state at the moment?
Is there a scene? There's a vast amount of music being made by all sorts and some of it I adore, some of it I don't. Same as most places. Probably the best thing to do is do away with that word as it implies we are all making similar music. With so many influences flying around thanks to the internet it's now possible to be as unique and special as ever. I'll tell you this though. What's great about Ireland as regards to its musicians is that there's a great generosity with support for fellow artists. You don't get that everywhere, no sir.

Plans for 2008?
Keep on playing, tour in new countries, write more, be happy, see what happens.

How are changes in technology influencing how you record, distribute or publicise your music?
When I was still writing this album I was able to put some of my songs, demo form, up on myspace. I can't stress how much more it did for me than all the a&r-ing in the world could have done. There is a ginormous community of people out there who don't want polished, over-cooked, over-hyped music delivered to their ears courtesy of some marketing suits. It was freedom for me. I wrote a song and people listened if they wanted to. I miss the quality of tangible music but I can do without.