Their album 'Gambler's Ballet' was nominated...

Ronan O'Snodaigh of Kila answers below the questions CLUAS put to all 10 acts nominated for the 2007 Choice Music Award. Check out the answers from the other nominated acts. 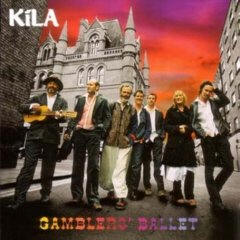 Give us a little synopsis of about how this album came about and what was it like writing and recording it?
Gamblers Ballet came about through a game of poker and all our instruments got lost in the poker, Colm won the pipes, I won the bass guitar, Rossa won the kit but lost his bouzouki and lance won an empty fridge from the rider... and Brian had to dance a ballet naked coz he'd no bass, which led us to the idea that recording an album would be a better business proposition than playing poker!!

How do you feel about the idea of music awards in general?
They are great when you get them.

Do you feel winning the award will enhance your career?
Maybe the band will start saluting each other if we win award.

Do you think the idea of the album is a little antiquated in these days of single track downloading and plummeting CD sales?
Yes in market terms but no in people's imaginations, just because you can get free TV or youtube on the internet doesn't mean people will stop wanting to make feature films. It's about making a body of music

Do you feel the Irish music scene is in a healthy state at the moment?
It might be more fun if everyone gave up working and just made music. Scenes are something you make so it is up to the individuals to make it brilliant.

Best gig you went to in 2007?
Us at the Electric Picnic, didn't get much time off to see other people last year unfortunately.

Plans for 2008?
To become a bulti-billionaire, play another game of poker with real stakes and try to win back my bodhran!!

How are changes in technology influencing how you record, distribute or publicise your music?
It makes everything more accessible, it makes it a lot easier to record it produce it and get it out there. as for making more money its not so clear yet.