Their album 'Louder & Clearer' was nominated for the award...

Stanley Super 800 answer below the questions CLUAS put to all 10 acts nominated for the 2007 Choice Music Award. Check out the answers from the other acts up for this year's award. 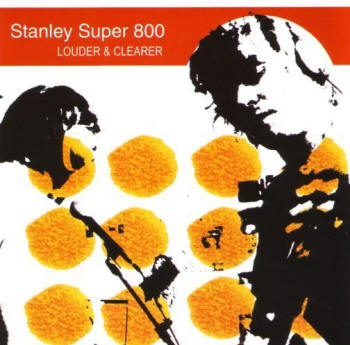 Give us a little synopsis of about how this album came about and what was it like writing and recording it?
"Louder & Clearer" is our second album. The first album (Stanley Super 800 2004) brought a certain amount of success but then it all levelled off, so we decided we better make another. We agreed we'd write and record something that would stand tall with any other album. It took a lot longer than we'd expected but we did it. Check it out, it might free your mind from the shit you've got to listen to now :-)

How do you feel about the idea of music awards in general?
The awards run by Telecom companies to get everyone texting on their network are daft and the other kind run by big record companies to slap each other on the back are fairly daft as well. The Choice Prize is needed now because the general music fan in Ireland knows more about the underground scene in Britain and the U.S. the what's going on outside their own door.

Do you feel winning the award will enhance your career?
Of course. We could do with all that free exposure...

Do you think the idea of the album is a little antiquated in these days of single track downloading and plummeting CD sales?
Maybe in a few years time it will be gone but there's nothing like exchanging CDs for needed cash after a storming gig.

Do you feel the Irish music scene is in a healthy state at the moment?
Not until television and radio give more air-time to Irish made music - we're whistling in the dark otherwise.

Best gig you went to in 2007?
Trost (in Pine Lodge, Myrtleville) and Fish Go Deep (at Cork X Southwest, Skibbereen).

Plans for 2008?
Be a good father. Stop smoking. Learn the Jews harp.

How are changes in technology influencing how you record, distribute or publicise your music?
Record - With everything becoming software based I've found it easy to collect older electronic equipment. Beware you'll never get that hardware back if I get it. :)

Distribute - Our music is about to go up on Vodafone and iTunes soon. I'm not sure if we can make money from it though.

Publicise - It's nice having a website. Updating it can be a pain in the hole though but you got to do it. We have a mailing list we to keep our admirers informed. I try to leave someone else handle the myspace. After Telly Savalas and Miley from Glenroe rejected my friendship I've been too upset to login...