This article was first published
on CLUAS in March 2006

Aidan turns his eye to the Irish music, as understood by the French...

So it's March again, the month when a certain green-tinted festival will be celebrated around the world by ex-pats and non-Pats alike. France too will join in the fun. Last year, posters plastered across every metro station in Paris were promoting a huge St Patrick's night concert at Bercy, the equivalent of The Point. The advertising featured a young red-haired dancer, Book-of-Kells typeface and a list of Celtic regions - Scotland, Wales, Cornwall, Brittany, the Isle of Man.... but not Ireland! Surely some mistake? 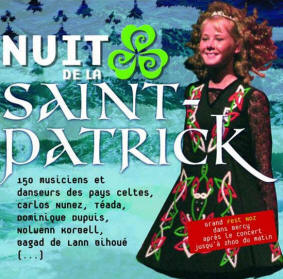 But no, on the news on March 17 there was a feature on the concert with interviews and footage, but Ireland or Irishness wasn't even mentioned once in a report on its own national holiday. This year's event doesn't highlight any countries or regions, but its overwhelming emphasis on Breton acts (with only a token representation by an Irish dance troupe) gives the impression that St Patrick's Day is a festival celebrating the Celticness of north-western France, and that Celtic music is about as Irish as Queen Elizabeth sipping Earl Grey while listening to the Artic Monkeys live at Stonehenge.

If we can't manage to hang onto our own national traditional genre of music, how is Ireland faring in the multinational no-borders world of rock and pop? English-speaking countries will probably be more sympathetic to Irish acts, not least because of the sizeable Irish populations there. On the other hand, if France is typical of how non-Anglophone countries view even our biggest acts, then the results are interesting to say the least.

Van Morrison, for instance, is not well-known here at all. This may seem surprising to us Anglophones brought up on him, especially since his music is played regularly on a hip, eclectic and hugely-popular Parisian radio station called FIP, so it's certainly not for the want of airplay. However, the otherwise-excellent FIP has a frustrating policy where its presenters don't introduce or back-announce the songs they play. As a result, many Parisians have heard Van without realising it - or going out to buy his records. Only the most clued-in French music fans, or those who have spent time in Ireland, know him.

The Pogues, for the obvious Celtic reason, are cult heroes in Brittany the way, say, The Pixies are in Ireland - festival headliners without topping the charts, for instance. Sinead O'Connor recently filled a mid-sized Paris venue, so her stock is holding steady here. Unfortunately, The Cranberries are still remembered in France - their popularity greatest among non-English-speaking rock fans immune to the worst of Dolores' lyrics.

As you'd expect, The Biggest Band In The World are vastly popular here too. Last year the European leg of the Vertigo tour filled the Stade de France for two nights before concluding in Nice, just up the road from the band's Riviera residence (more Irish people living in France, just like your correspondent). However, from talking to people here who have never been to Ireland, it seems that U2 are instinctively considered an 'international' act - just as the IRMA Awards in the 1980s used to put U2 in the 'Best International Group' category instead of 'Best Irish Group' so that Aslan and A House had a chance to win. Reminded that the band are from Dublin, the reaction tends to be 'ah, that's right', as if remembering the name of a forgotten schoolmate after twenty years. Has our biggest band gone completely IRMA and outgrown its Irishness in the eyes of the world?

Not that the Irishness of Irish rock acts isn't being pushed by record companies - far from it. In France, the Hal album carries a tricoloured sticker proclaiming 'From Ireland!' and giving translated review quotes from the British music press. The intention is clear; if you know Ireland, like English-language indie (in this instance, Brian Wilson sycophants) and form your world-view by way of the NME front cover, you'll want to buy this record. For slightly different reasons, The Corrs' most recent album carries a similar sticker, this time emphasising the 'Celticness' of the record. For record buyers from Brittany, perhaps.

In an ideal world, of course, an act's nationality would be completely irrelevant. But we all instinctively prejudge bands on their place of origin. 'A Manchester band' initially seems more promising than 'a Belgian band', though the former may turn out to be Simply Red and the latter dEUS. And what is a 'scene' except promo-shorthand for 'you liked band X from New York/London/Letterkenny, so you'll love band Y from there too'?

So, is the green card really something that ambitious Irish acts must consider playing? And is it an ace or a joker? It's hard to answer definitively either way - but a band or artist certainly needs every advantage they can take.

However, we ought to end on a note of success. As it happens, there's an Irish artist currently in the top ten album chart in France and many other countries worldwide. Yes, to be an Irish person living abroad is to come to the jarring realisation that a substantial number of people on this planet probably form their impression of Ireland and Irishness through listening to the works of Enya.