The credit card generation was out tonight; it seems the Pixies are back to their original fan base rather than a new one. But, with no new album to promote, what's it all about? It really cash? 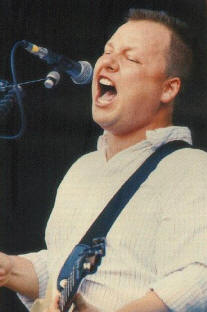 Well, Brixton Academy sold out four nights in as many minutes and before the show, there mood was of expectation coupled with that slight sense of fear that maybe The Pixies were of a time long gone and had nothing new to offer.

It's been a mixed decade where Joey Santiago and David Lovering have been largely anonymous, Kim Deal had some early success with The Breeders, while Frank Black has toured consistently, been feted by David Bowie, but has largely lived off the Pixies legacy.

The set began frantically, with Lovering making the early running and abandoning any fears that tonight was a nostalgia trip. Dave made the effort by wearing a shirt, otherwise it was black clothing all round.

The first highlight came with Joey Santiago totally transforming Vamos, with a blistering display of feedback and effects reminiscent of the Velvets "Sister Ray". From there, we rocked and rolled through The Pixies only commercial success "Here Comes Your Man". "Cactus", "Monkey Gone to Heaven" and "Subbacultcha" was reeled off as alternative greatest hits.

During "Tame", Dave Lovering threw a drumstick in the air and, phenomenally, caught it without losing a beat. Kim's bass was pin-sharp and impossibly tight, when singing "In Heaven". Joey's guitar was constantly inventive, breathing fresh live into old songs. Frank should be a rapper, such is his verbal dexterity (try singing along!!).

Since their break-up, we've been treated to 'new material' in the form of B-Sides and BBC Sessions. The first of two Wave of Mutilation (UK Surf) versions came from here, while after 75 minutes, the set closed with the more familiar version.

So, the verdict? Well, 20 minutes after the show was over, 2,000 fans were still calling for an encore. The show just wasn't long enough!! I'd have liked to hear "Manta Ray", and other tracks compiled since the bands demise, but it wasn't to be.

I hear that official bootlegs are on sale at some gigs and I suspect next up is a live album on the shelves. However, the enthusiasm of both band and audience tonight, suggest that rumours of death are greatly exaggerated.

The archives are exhausted so let's hope they can keep it together long enough to put some of that inventiveness into new recordings.