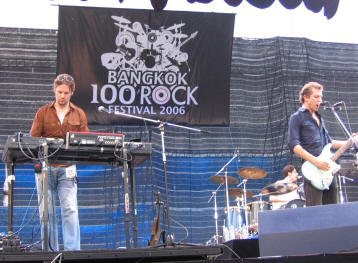 After an embarrassing exit before even their first song (the sound hadn't been switched on) Belgium's most famous band dEUS opened the international section of the inaugural Bangkok 100 Rock festival. Coming onto the single large stage by a lake outside Thailand's capital after local act Ebola and with fellow Beneluxers Placebo watching proceedings from the wings, dEUS seemed keen to prove they're still one of the best bands ever to write outside their native tongue. Instant Street came early, an acoustic intro to a set that drew heavily from the band's Ideal Crash album. Hard strumming electric and Klass Janzoons' trademark violin slammed in for a fast finish to the song.

Loose but tight at the same time and going off in squiggly instrumentals, dEUS rarely reminded one of their Irish sound-alikes the Frames. The Belgians' sound on newer tracks were reminiscent of another Irish group, A House, all country infused guitars and on-off spoken vocals interspersed with bassist Alan Gevaert's screaming responses. Other songs peak and then flatten and fatten out into hip-hopesque tapping and even funk guitars. It proved a bit too much of everything and not enough of anything particularly strong for many tuned out Thais rock fans up the front. There were hard core followers here too judging by the screams of recognition and a Belgian flag at the opening chords to 1994's Via, off the Worst Case Scenario album. Simple slices of violin had great effect here and later on similarly paced Sold On Magnus, slowed by a keyboard intro before it delivers something more ambitious when Tom Barman's vocals and guitar mesh with Mauro Pawlowski's growly back up and guitar.

Violin gripped now like a guitar, Janzoons leans off Barman as the lights mark the hour-point. The 30 degree C heat of the early evening was taking a toll on the Flemish but they held on, and got better. The concrete floor below, worringly slow to fill all afternoon, shook when two slabs of static segue into a bit of old gold, Nothing Really Ends, dEUS proved their worth of being the only non-British, Irish (Snow Patrol) or Thai group on the bill. They'll never be legends but their songs offer the power and rhythm and proof that Belgians can be rock stars for a night.