Bodies were busy scuttling in from the rain on a miserable Thursday evening. Inside the Wexford Street venue the ever-impressive Fionn Regan was welcoming the early crowd. The Bray singer/songwriter proved to be a good opening act with 'Hotel Room' standing out as his best song. 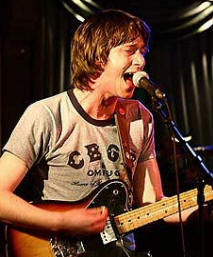 A more mature crowd occupied the seating area in front of the stage while a small compact crowd stood gossiping. It seemed that a lot of the crowd did not know who the main act were and more interested in the upcoming Frames gig. 'Aren't they like The Thrills?' muttered a petite blonde woman. 'We'll soon find out' answered her Beach Boys t-shirt wearing companion.

Hal didn't take long to arrive on stage, opening with a sleepy track that reminded on of J.J. Cale. With an incessant drumbeat hammering behind the Byrd's-like vocals, silence was soon lost somewhere between the music and the crowd's now cemented concentration. Winding keyboards, rusty drums, a slithering bass and direct vocals turned 'Fools By Your Side' into an intriguing adventure. That adventure continued as the romanticised 'Take This Cold Hand' and the delectable 'I Sat Down' - which could easily serve as a flavoured piece of nostalgia for an early 70s home movie - warmed the crowd right out of their damp garments.

While the band's nerves were finally beginning to settle and the crowd had discovered the sound of Hal, there was still something missing. The atmosphere wasn't overly great but that wasn't it. It was the songs. As expected from a band that produces mellow sun-soaked tunes there are plenty of hooks within the songs. But some of the verses fall flat and almost cry out for a little added spice. Songs like 'Satisfied' and 'Coming Right Over' need that extra structure so they can step up from being an average tune.

In contrast to this there were perfectly arranged songs like 'Stop' with its delicious aftertaste and the single-worthy 'Golden Rule' with its purified simplicity. There is little connection with the crowd but they are too busy lapping up each song to be bothered with useless blabber from the band. The avalanching keyboards on 'What A Lovely Dance' set the mood for rushing guitars & drums to provide the soundtrack to the lyrics of hope. The highlight of the show comes with the tinkering melody of 'Worry About The Wind'. The inclusion of harmonica adds extra gusto as the hit single is performed very energetically, much to the crowd's delight.

During their short set of just ten songs, some of the crowd failed to settle with the band's sound but for the rest of the audience who Hal did manage to charm, it was a very good performance. Expect to hear more of this band when they release their debut album over the coming months.