Before I start - and I make no apologies for this admission - I would like to share something with you all. I cried during "The National Anthem'. I did. I cried. It was that good. Onward ho. 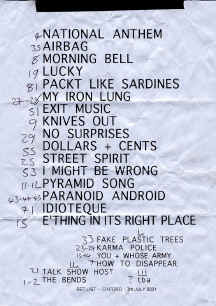 The mouth watering line-up for this mini festival - which included Sigur Ros, Beck, Supergrass and of course the mighty Radiohead - ensured that the 42,000 or so revellers who descended upon Oxford's South Park where we were all going to have - as the man says - 'a time'.

With the support acts finished, excitement levels soon reached fever pitch. Then, with 1920s style crooning out over the speakers, the lights dimmed. Ladies and Gentlemen, cue Radiohead.

Colin Greenwood's heavy, fuzzy bass intro to 'The National Anthem' sent the crowd into a frenzy along with Thom gesticulating as if 10,000 volts of electricity had just been sent through his wiry frame. It was the perfect way to open the show.

Next up was 'Airbag' after which Thom walked up to the mic as if about to speak, only to be rendered speechless, then laughing in disbelief at the sheer enormity of the situation he had just found himself in.

The pace may have changed with 'Morning Bell' and 'Lucky' but, for me, one of the real highlights tonight was 'Exit Music...'. No question. During the opening chords Thom gently hushed the sea of people who stood in front of him. It was a very simple request and was duly obeyed by everyone. It was a sight to behold, watching such a beautiful song being performed the way it should be - in total silence. That moment will stay with me for a long time to come. 'Knives Out' followed, probably the best track on Amnesiac. A real treat from start to finish.

The band had been quite understandably suffering from a touch of the nerves. That is, up to this point. Watching them perform 'No Surprises', they banished all signs of nervousness. 'Dollars and Cents', as with many of the songs from Kid A and Amnesiac, saw Radiohead prove their doubters wrong by transforming such tracks into live classics.

After a stunning version of Street Spirit, came another two tracks from Amnesiac - 'I Might Be Wrong' and 'Pyramid Song'. The latter being a world away from the studio version but still just as haunting. Paranoid Android followed which Thom dedicated to 'that blonde one from the Spice Girls.........what's her name?........Geri, yeah that's it'.

Idioteque's pumping techno beats saw Thom yet again dancing like a crazed monkey, only this time, completely losing himself in the music. A sight to behold. The set finished with 'Everything In It's Right Place'. Once again, we see another track from Kid A get a severe makeover.

They returned for the encores, still visibly shocked by the size of the crowd. 'Fake Plastic Trees' provided a real lighters-in-the-air moment. Or so I thought. It seems that in today's world of technology, the cigarette lighter has been replaced by the mobile phone of all things. Karma Police gave the crowd yet another opportunity to exercise their vocal chords during the "for a minute there, I lost myself" refrain. And how we lost ourselves. 'You and Whose Army' was followed by 'How to Disappear Completely' with the lines "I'm not here / this isn't happening" seemed somehow fitting before they left the stage a second time.

Then it rained. Oh how it rained. But was never going dampen our spirits, especially when Radiohead made their way back on stage and, as soon as Colin had finished taking a few snaps of his own, went straight into the live favorite Talk Show Host. The line "I'll be waiting with a gun and a pack of sandwiches" remains for me one their best ever written. The rain kept coming, heavier than before and we danced like it was the last song we would ever dance to, unaware of what was still to come. And then, when we thought it couldn't get any better, along came one last song - 'The Bends'. Radiohead gave it absolutely everything they had, as did we. I moved like I've never moved before, screamed until I could scream no more and once again was reduced to tears. It was one of the happiest moments of my life.

A matter of minutes later, Thom came back on stage with Jonny. "This is to send you home with bluebirds in your hair", said Thom. Say no more. The opening notes to 'Motion Picture Soundtrack' seemed like the perfect way to finish. That is, had Thom's keyboard decided to function. Just as he began it ceased to work. "Dat is Kaput ya?" he joked , "...forget that, let's try something a bit older" as he called the rest of the band back onstage. A deafening and truly spine chilling scream heralded 'Creep'. It was at that point that I realised exactly how lucky I was. It doesn't get any more special than this. The crowd savoured every word, hung on every syllable, mimicked Jonny's beefy guitar bit's and remained dazzled by a spectacular light show. What a finale.

And so it ended. We were wet, very wet, but also very very happy. It was without a doubt the best concert I have ever witnessed. It was my tenth time seeing Radiohead live and although each one was truly special in its own way, I never thought that I would ever see them put on a show like this.

Let me finish with this: those people out there with tickets for Slane should also shed a tear, as I regret to inform you all that the concert of the year has already taken place.