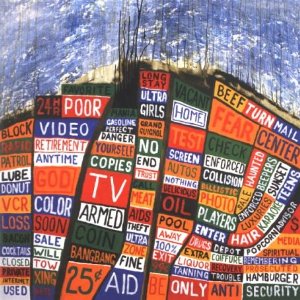 Ed O'Brien, Radiohead perpetual nice-guy guitarist, reckons if his band were a football team, they'd be Man United and not Real Madrid, as Coldplay's Chris Martin thinks. If he's right, then, just as the Red Devils were written off and then returned with a bang (albeit unconvincingly) to regain Champions status, so Radiohead will soon be back on the throne as High Imperial Sorcerers of Rock. Having misplaced their crown on the last few attempts, this is a return to the Brit Pop days. Kind of?

The first thing you notice about 'Hail to the Thief' is the sleeve. The cover and first seven pages are merely random words ('Enforced' sits beside 'collision' and 'ballistic' in meaningless babble). The rest of the sleeve - which features lyrics - a first for Radiohead since the glory days of 1997's 'OK Computer' - has a Sgt Pepper feel to it (note that if the Beatles were still active, they'd be Radiohead's Parlophone label-mates). Also thought-provoking is that each track is given a bracketed pseudonym.

'Hail To The Thief' begins with the daunting '2+2=5', a track with a tangible 'Knives Out' vibe. "Are you such a dreamer / to pull the world to rights?" Immediately you sense a hidden political agenda. The chords seem ad hoc and unplanned but two minutes in the song launches into a violent, squealing assault. The album's title being roared over it affirms the political sway (it refers to George W Bush). It is followed by the more sombre 'Sit Down, Stand Up' whose lyrics seem vague ("We can wipe you out at any time"), and again the 'drums' (more of an overused sample of something akin to Underworld) build tension as Yorke wails "The Raindrops" a few dozen times. At the end it almost sounds like it's borrowing some Apollo 440. This is a consistent theme throughout the album; there's a vague hint of recalling music of the last five years (Noel Gallagher musical cat-burglary springs to mind) but Radiohead are not so blatant and probably don't even realise they're doing it. The similarities are so slight but definite.

'Sail To The Moon' is a piano wannabe-ballad but fails due to the return of the unpredictable chords. Maybe they have been listening to other music during their hiatus, but nobody's been sneaking a listen to Coldplay. The lyric goes "Maybe You'll be President, but know right from wrong / or in the flood you'll build an ark and sail us to the moon". Maybe now you know where Yorke's son Noah got his name. 'Backdrifts' returns to the 'Sit Down, Stand Up' model of a drum sample with vague lyrics and looping, sombre monophonic guitar - like a lot of Amnesiac.

'Go To Sleep' picks up where the opener left off, a la 'Knives Out'. There is a definite sense though that Radiohead can produce ear-pleasing music. "Over my dead body," the lyric repeats at the opening. And for a completely inexplicable reason, it's pleasing to hear. If the band had never created 'The Bends' or 'OK Computer' this would probably be their best stuff.

'Where I End and You Begin' sounds like something else. There's a definite feeling of deja-heard about it. It's one of those 90's songs that everyone knows but nobody can place (possibly Hootie and the Blowfish?). Although discordal, it too is also strangely pleasing to hear. Radiohead have begun to get into gear and the album begins to grow on you. You realise for the first time that there are actual songs here you will want to play again.

'We Suck Young Blood' is not to be approached with a comic anticipation. Handclaps (sic!) are put in at the end of each line. A hybrid of Amnesiac duo 'Life In A Glasshouse' and 'Pyramid Song', it's bloody well haunting. The vocal line hangs. "Are you sweet? / Are your fresh? / Are you strung up by the wrists?" The middle section contains the most off-putting vocal yelps on any Radiohead track yet, but as a whole? Well, suffice it to say that you wouldn't want to meet its personification in a dark alley.

With 'The Gloaming' you sense Radiohead want to prove a point - "Murderers, you're murderers / we are not the same as you" - but the music unfortunately doesn't reciprocate - another overused percussion to blame. Next up is the album's first single 'There There' which, although dark, is the most positive Radiohead single since 1997. It's tuneful and its heavy percussion is a damn good antidote to an S Club Juniors or Girls Aloud overdose. It's a dense track, and borrows from 'Climbing Up The Walls' in its vocal sense of inescapability ("Why so green and lonely? Heaven sent you to me").

'I Will' is a hymn of sorts, dedicated to those accidentally killed during both Gulf Wars but doesn't manage to sound too glorious. There's a vibe similar to that from 'The Lake Isle of Innisfree' with the opening lines "I will / Lay me down / In a bunker / underground". You can't quite place the influences but you know they're there - another consistent theme. The next track, 'A Punch-up At A Wedding', demonstrates this beautifully. Another bass line that you know you've heard before. But what the hell is it? It could just have easily been from a later All Saints track. The words 'punch-up' at the end get added venom from Yorke's well-acted rage.

The title of the next track, 'Myxomatosis', suggests a parody, but a parody this is not. This is good stuff that would have fitted in quite brilliantly on Kid A. The twin octaved bass lines roll continuously through the track (the word 'song' doesn't feel right talking about this album. The lyrics evoke a non-existent Bagpuss story, catapulted into the world of Grand Theft Auto. 'Scatterbrain', the penultimate track, maintains a nice guitar arpeggio unheard of since 'Street Spirit...'. For a second you think they've cracked it and gone back to the glory days, but the chords move differently while still maintaining a warmth and steadiness that's welcoming after the shaky, experimental opening of the first few tracks.

The finale, 'A Wolf At The Door', is a violent lyrical assault. Thom, for once, doesn't let lyrics hang. It's the closest Radiohead will ever get to a rap but it's not a rap. It's just a non-stop barrage of sensible gibberish. "flip the lid out pops the cracker smacks you in the head knifes you in the neck". It's all connected and relates to what's come before but still doesn't quite hold a plot. The chorus maintains the barrage but holds an independent plot. "I keep the wolf from the door but he calls me up / calls me up on the phone, tells me all the ways that he's gonna mess me up / steal all my children if I don't pay the ransom / & I'll never see them again if I squeal to the cops". The chords add to the glory - it's definitely a grower and seems a contender for second single.

At the end, a point begins to dawn on you. This is a well-thought out and diverse offering and if the band as a whole were willing to put the Kid A / Amnesiac sessions behind them then - make no mistake - this would be a classic of The Bends and OK Computer's stature. As it is, it's a cracking attempt and you feel by the end that you can see which parts of the album the 'sunshine' - that the band felt they'd experienced for the first time in five years - have influenced. A little more of a break and a masterpiece is on the cards.

Above all there is definitely the message that Radiohead are back and, given the patience, they will do even better.