Review of their album 'See the Morning In' 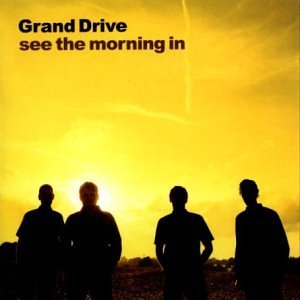 Right that's it, I've picked the best album of the past six months. Recently released in Ireland (it's been on the shelves in the UK since October 2002) 'See The Morning In' is about as un-hackneyed, un-stilted, un-pretentious and sheer bloody accomplished an album as this writer has picked up since before the Christmas release rush. Many bands talk the talk and make it out of the A&R office smiling only to burn out hardly a year the other side of an EP release. The stuff of bad-tempered board meetings for the record company suits?

But here's a young band that walks the walk, has the big-label (BMG) deal but these fellows are proving with each release that they're going the way of commercial success with good taste trappings latched on. This is wonderfully written, soul-tugging alt country that somehow meshes the wide-open adventure of Grand Drive founder brothers Danny (lead vocals/guitar) and Julian Wilson's (keyboards) homeland of Australia with the cosy suburbia of the southwest London suburb of Sutton where they grew up.

I first latched on to the band after catching them on a Steve Lamacq BBC show last year. Main-man Danny was talking records, favourite records. The most battered and scratched CDs propping up the Grand Drive stereo take no prisoners in taste. From the sublimely soulful Solomon Burke, under-rated rival to James Brown's crown onward to gold-plateable Johnny Cash; rough diamond songsmith Steve Earle; and the master of intelligent and politically intelligible music, Bruce Springsteen, the Grand Drive have thrown some exquisite ingredients into their song-making pot. But then you hear Danny name-checking Wilco and Queens of the Stone Age while lauding Ryan Adams producee Jesse Malin and you know this band's got to be put under surveillance.

'See The Morning In' is their third album but the tricks of the Grand Drive trade have remained largely constant: constant heartful yearning, mind-twisting melancholia, nostalgic tunes and melodies. This is not the record you'll want on your stereo if you're in the business of forgetting old loves or a love spurned. There's a bit of the Byrds here, and a lot more of the Beach Boys in the quality of the harmonies. The musicianship and neat variations in tempo are what makes 'See the Morning In' a big league hitter compared to lesser alt-country creations - and I've many earnest but less technically competent candidates in mind.

On this record a gentle acoustic ballad like 'You and I' slides totally comfortably up against a rock-out like 'Track 40'. The best moments on the album are the former and 'Nobody Would Ever Dream' but there's no filler on this album. The sleek production and absolute perfectionism of the Wilson brothers set Grand Drive apart but the unerring harmony, sweet melody and crisp songwriting of this album speak for themselves.

It's a pity the packaging wasn't better - all hackneyed sunlight silhouette and blocky type face on the front make this look like a computer student-created demo cover and not the record store public face of a BMG premier league hopeful. But it remains: my favourite.