As I sit on a terrasse sipping my caf?allong?/i> and watching Parisian commuters scowl at tourists, I reflect on the many wonderful things about life in France - excellent food; streets alive with history and art; Juliette Binoche.

Unfortunately, being the CLUAS correspondent in Paris involves listening to a lot of French alternative music - and French alternative music is quite dire. Jacques le Frenchman can effortlessly turn leftovers into haute cuisine, clothes into couture, movies into nouvelle vague. Give him a guitar, though, and suddenly he loses all sense of style, sophistication or self-consciousness. Three minutes of squirming embarrassment and nostalgia for roadworks is usually the reaction of Anglophones forced to listen to Noir Desir (whose lead singer is currently in jail for manslaughter), M (a glam rocker who wears his hair in the shape of an M. Seriously!), Louise Attaque (a strangely-named an all-male band) and the like. 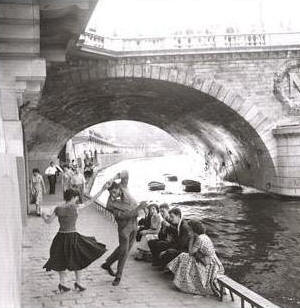 Of course, French people love good guitar music too. Arcade Fire, Franz Ferdinand, Kaiser Chiefs, Interpol - French music fans love all the acts that are popular in Britain and Ireland, and the NME-front-cover barometer of hot new acts is watched closely by the Paris music press. Yet French acts that would be idolised by indie-kids in other countries (I can recommend The Married Monk, a Breton band who sometimes play with Yann 'Amelie-soundtrack' Tiersen) merely scrape a living on the college circuit. Meanwhile, more and more bland rockers roll off the production line to almost instant and unopposed deification (my own pet hate is a completely tuneless group called Mickey 3-D who seem to be worshipped on French indie radio). Why does a country of otherwise sophisticated people make such awful music?

Compared to the reserved nature of people from the northern pop-producing countries - Britain, Sweden, Canada and the north-eastern United States - the French tend to be more demonstrative and vocal in public, like Mediterranean cultures. People here love debating and discussing, whether at the dinner table or on television, and their music shows a similar love for storytelling and expressing strong opinions or emotions. Rap, for instance, has really taken off in France - especially given the current social climate of disaffected ghettoised youth. It's a form that naturally appeals to the French love of public debate.

To French audiences across all musical genres, interesting lyrics are more important than catchy melodies - and it shows. The songs of Georges Brassens, a hugely popular folk singer from the 60s, sound more like recited poems to any Anglophone brought up with The Beatles or U2 in their subconsciousness. His modern-day equivalent, a nauseatingly bad singer-songer called Raphael, makes James Blunt sound like Joni Mitchell.

The sense of style and fashion we associate with France also explains why its electronica (a good beginner's guide is the excellent 'My House In Montmartre' compilation) is so influential - what else sounds like the natural soundtrack to the catwalks of Paris or the exclusive nightclubs on the Cote d'Azur? But rock is reactionary - and French rockers seem to react against the cooler-than-thee national stereotype by glorifying passion, authenticity and ordinariness. However, sang froid, panache and je ne sais quoi are French qualities celebrated by the rest of the world in our rock icons, from Elvis through Bowie and up to the art-school arrogance of today's new guitar bands. To rebel against these ideas is to miss the whole point of being in a band in the first place.

Maybe France is just not good at rock music (Ireland can't claim to be much better, by the way - The Cranberries are still remembered fondly here?). However, given that they tend to excel at everything else - with the Six Nations and World Cup in mind - their response would probably be a typically Gallic shrug and a - m'est "al ('I couldn't care less').