A review of their album 'Employment' 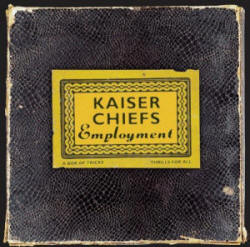 Review Snapshot:
Leeds revellers the Kaiser Chiefs offer up 'Employment' as their first full-length recording. It is a lively hybrid of Britpop and Indie Rock that contains many arresting tunes.

Full review:
Every few years, there is a resurgence of particular genres in the music industry. Sometimes they can be resurrected in shiny new sub genres e.g. Nu-Metal in the 90s, while sometimes they are just cheap karaoke misfires. 2005 has so far been graced with the Britpop revival train, which has left the station with its carriages crammed with bands ready to 'try' and entertain.

With obvious nods to The Kinks ('Na Na Na Na Naa') and The Beach Boys ('Caroline, Yes'), it is the comparison with Blur that will churn over and over on this album. The Kaiser Chiefs go back to the cheeky 'Parklife' period where frontman Ricky Wilson sings with that Albarn assurance while the guitars echo that of Graham Coxon. (Incidentally Coxon does a cameo on the album, revving his motorbike in the opening seconds of 'Saturday Night').

But the Blur comparison wears off after numerous listens as the catchiness of 'Oh My God' and 'Modern Way', and the numbingly perfect blend of drums and guitars, prove that the band have their own sound. That sound, accompanied by the social commentary in the lyrics ('I Predict A Riot') has the power to elevate the band into a big festival act or into the latest composers of your bus journey soundtrack.

The album itself introduces the band with some really good tunes but it will not hold the same punch in ten years time as it does on first listen. This is mainly because the latter half of the album feels rushed. If they waited a little longer to complete the whole album with producer Stephen Street, instead of doing half with him and half with Steve Harris, the pop edginess that they thrive on might have been kept intact.

Despite their inexperience in that judgement, this album is worth getting just for the sheer entertainment value of about half of the twelve songs on offer.

The Kaiser Chiefs will not provide an everlasting cinematic and grandiose experience but they will entertain while their songs remain fresh sounding.