A review of their album 'Funeral' 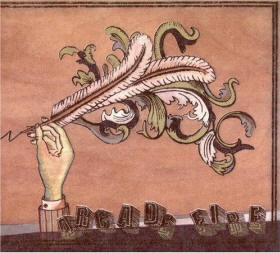 Review Snapshot:
Stepping outside into a cold New York morning, hungover, shaky, but today is beautiful: cold and sunny. Quick inhale of scintillatingly chilling fresh clean air, that euphoric spinal rush that happens only at times like these, and all of a sudden "Funeral" made sense. I love this album, it makes me tick. Wonderful melodies, intricate scoring, pulsating, organic, subtle, once again music is alive and well.

The Arcade Fire's debut offering "Funeral" is a shimmering work of art; creative, original, beautifully manic, seamless. It's almost like a modern day "Forever Changes" - an organic mesh of strings and rock. Don't get me wrong though, this is no 60's throwback or retro revival, it is of-the-day and genuine.

As an album, I don't quite know how it works, on paper this is the type of music I would usually run a mile from, that "emotional-angst-inner feelings-misunderstood" vibe permeates most reviews, but somehow this goes beyond that. "Funeral" manages to be emotional music without the associated pretentiousness, simple, direct and uplifting. It marries strings, plinking pianos, crazy guitars, iridescent vocals and a solid, driving drumbeat. The trio hail from Montreal and a wonderfully quaint almost folkish tinge subtly permeates the album. Indeed second track "Laika" uses an accordion to striking effect, evoking images of Quebec in autumn, a stately elegance, before bursting into something a little more... robust.

This is a hard album to pigeon hole and define. It's creative without being psychedelic, rock without being exceptionally loud or distorted, experimental without serious drug overtones, strings without being saccharine, emotional without preaching. I imagine this band like nothing more than a nice glass of red wine and a good sativa, with the occasional bit of gonzo thrown in to smooth out the edges. These seem to be normal people, good people. Other reviews have focused on the deaths in the band's extended family which preceded the recording of this album, how it "affected" them, but I'm no psychologist and I never really got that from the music, so I'm not going to dwell, oh it's called "Funeral" whoop-de-doo.

One of the album's standout tracks for me is "Une Ann? Sans Lumiere" a nice interlude between the "Neighbourhood" quadrology. It starts of slowly, with hushed almost lullaby-esque vocals, before ramping up into an elevating final coda, and lurching straight into "Power Out." Mind you as soon as I write that "Wake Up" comes on. It kicks off with a crunching guitar riff, steady drums, then a soft string "chime" overlaid with a beautiful harmonic choir. How the f**k do The Arcade Fire make this work!?! I've absolutely no idea, but I like it.

Then there's "Rebellion (Lies)". I'm not going to say much about this tune, it says it all itself. Infectious, pulsating, pop as it should be, for me the album's standout track. I don't like using the word 'pop', (Busted and their ilk ruined that for all of us) but this is pop the way I've always thought of it. Gloriously melodic, and it's even got a few hand claps.

I've been racking my brain trying to think of a band to compare The Arcade Fire to, and all I can think of is The Polyphonic Spree not at all in terms of music, but based entirely on passion. This album is full of it, you imagine these guys would be great in a small venue, turned up loud; a mass orgy of euphoria and cerebral celebration. It's music that'll get your foot tapping and your head nodding. It's not everyday you get to hear an album that just connects, that you know is timeless. Hell, you don't have to make an effort to like this. This isn't some new band you're throwing your weight behind just to be seen to like new music. This isn't like The White Stripes, or The Strokes, "good but..." You'll still like this album next year, and beyond.

Fix yourself a glass of rum and as the liquid crackles softly over the ice, close your eyes, tilt your head back and let the sound wash over you.

Check out as well the CLUAS.com review of the Arcade Fire live in London in May 2005.