Potholes. An oddly Irish phenomenon. In an ideal world we'd have a perfect road. But as we approach, you'll see the cracks. And as you get closer they become gaping holes.

Oxegen too has become an Irish phenomenon. Selling out 47,500 tickets with almost 100 acts playing. But as we approach Oxegen you'll see the cracks. As you get closer there's a gaping hole. No David Bowie. So what do we do? Fill a pothole with some sand and, sure we'll hope it covers up well. Hello 'The Darkness my old friend' as Sunday's headliners. An Irish solution to an Irish problem?

Another problem is the weather. For two days the wind and rain batters us. Not senseless, we're still aware we're being soaked. But it doesn't help the resolve.

That's because the 50,000 odd young Irish revellers are determined to enjoy themselves. And Scissor Sisters enable them to do so. Okay, they're naff, they're electroclash two years too late. But they're armed with tunes like Comfortably Numb, Laura and Take Your Mama. Young, dumb, but crucially full of fun.

Franz Ferdinand are so cool it hurts. They carry off the kind of clothes you or I'd get beaten up for even looking at. At times their arch guitar pop is so good it takes you back to when the Smiths dominated the charts. If the band's sound and Alex Kapranos' voice hadn't got lost in the swirling wind, they could have been great.

The Rapture must feel a little wooden. Not their performance, it's just like a tree when a dog comes along, they're being pissed on. As are their audience. Those who do brave the conditions see the band start slowly and build up their punk funk muscular grooves. Plus, the atmosphere can be a little lacking when you're playing to a crowd who are standing on a half empty car park.

Someone who could play anywhere and make it sound like the most intense experience on Earth is Polly Jean Harvey. She delivers the best Irish festival performance since U2 at Slane in 2001. Her power, poise and voice mark her out as perhaps the best female performer of the last 20 years. And even songs from her slow burning new album, Uh Huh Her sound at once raucous and vulnerable. 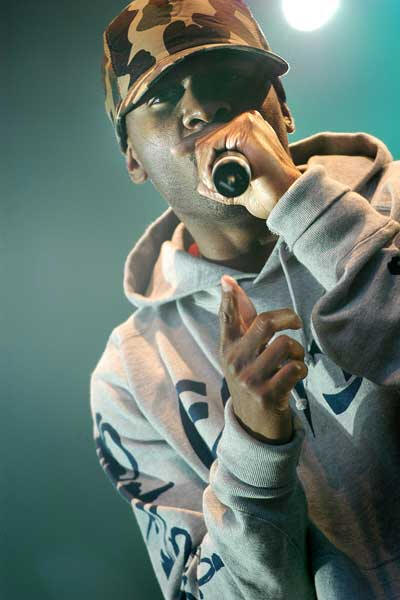 How do you follow that? Snow Patrol seem to do a decent job of it with their indie-pop for outsiders that it's okay for the jocks to like. People are smiling through the rain. Maybe they're thinking how lucky they are compared to Gary Lightbody and his seeming inability to hang onto a girl?

Kings of Leon rattle away on the main stage. What criteria is there for them being third from top of the bill other than looking like they stepped out of the 70s and wearing girl's tee-shirts? It's not their recycled country rock anyway.

Elbow can sound massive and tiny as they do on Red. So they don't make the NME cover. But they do remind you soulful guitar music from Manchester can still move people. And the addition of a cellist makes things even more moving.

Moving onto Hope of The States, the band who tragically lost their guitarist Jimmi Laurence to his demons earlier in the year. Their constant heads-down intensity suggests the end of the world could be on the way. And while there's optimism in the lyrics, the music is so relentlessly insistent that after a while you wish for something lighter.

Which is where NERD come in. A group of ultra-modern super producers who are so sensitive to commercial success that they re-recorded their entire original (and brilliant) debut album when it's first single bombed, they've now moved in a new rock direction. Or what they can imagine reams of kids in malls listening to. It's not bad but fairly dry, in contrast to the weather. They should have stuck to what they were brilliant at.

Tonight Matthew, The Strokes play Last Night, or is it The Modern Age? For the first three songs they're everything you'd want, catchy as hell. Unbelievably cool. Tunes aplenty. Then the next three songs are the same. And the next three. And you realise the song remains the same. Again and again. It might be worth taking time out and reinventing yourselves lads.

Unlike The Cure, who will always be the same, just a little different. You know what I mean, each time you hear The Cure you know it's them. The dreamy synth and atmospheric guitar. The wailing Robert Smith. And they're magic (of the black variety of course) for the first while. Then you notice the magic is fading. There's a keyboard player with his finger permanently on a key (providing mystique), a guitarist strums relentlessly (for atmosphere) and Bob does his thing. Sorry, it's worthy, but it's not quite getting the party started.

Neither does Massive Attack's post millennium gloom. That used to be pre-millennium by the way. Orbital's last ever Irish gig is thronged, and they make more than a few people happy. They'll be missed.

Surprisingly Belle and Sebastian are absolute party animals. They've been called fey. They've been called twee. But they spoil us with their winsome pop and northern soul. 'Legal Man', 'Step into My Office' and the Thin Lizzy-inspired I'm A Cuckoo get the kids dancing. And 'The Boy With The Arab Strap' is as hand-clappingly uplifting as you'd hope. Ireland had waited five years for this, and both band and crowd make sure they enjoy it.

Check out the CLUAS coverage of Day 2 of Oxegen 2004