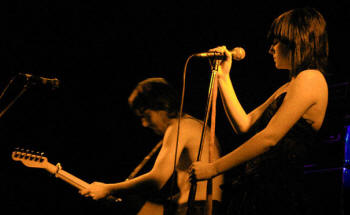 Review Snapshot:
Another night at Whelan's, another nutcase in a thong. Apart from the aforementioned figure of terror peeping out from the stage, Ham Sandwich do a pretty good job at putting on a show, especially with forlorn lyrics of pain, abandonment and closure; just add some punchy guitars and you can't go wrong.

Full review: After first hearing their debut, 'Sad Songs' last summer when Phantom FM was still on the air, I was very impressed with what I had heard. The morose opening chords that blaze into a distortion of promise reminding you of the efficiency that the whole loud/quiet system can have on a listener. Coupled with the heartbroken/breaking lyrics which seem to be their trademark they really stand out from today's drudgery of whining confessors that frequent these doors.

Tonight they are in good form despite a ropey start, but that's all in the can by the third song. Guitar chicks are very much in fashion these days as the sultry presence of singer Niamh Farrell adds some much needed female sexuality to the gig (she comes complete with "prom dress" as a middle aged American punter tells me), she shines on 'Click... Click... Boom!' and the joint vocals of Farrell and male singer/guitarist Podge work well together. Comparisons to Sons & Daughters are plausible, especially with songs such as 'This Screaming Silence' and the harmonizing on 'Heart Break Her' is the stuff good pop- rock songs are made of. Podge has a good Nick Cave drone without the outbursts of morbid vehemence and Farrell's vocals can switch from honey-kissed to hollering from verse to chorus.

Despite the great performance and on-stage antics of the near-naked Podge, the audience still chats amongst themselves, much like every other crowd in Ireland these days. Despite paying £10 in to see a gig, you'd think that they'd at least give the band the attention they deserve, but at some times during the gig the murmur of the audience is competing with the band; and the band are pretty loud.

But all in all they're a fully confident young band and they win the murmuring mob over. They have the guitar pop songs that would go down well with trendies, musos, and the general-music loving public. They have the hot rock chick singer (who I was afraid to dance with afterwards, it was like being 13 again), the crazy lead guitarist and a rhythm guitarist who reminds me of the son from the cannibal family in 'The 'Burbs' for some reason. The bassist does a cool ROCK-ON performance while holding some sort of quiet dignity and the drummer is does his job with some great thrashing.

Having read a review from the bands appearance at last year'sHard Working Class Heroes, it seems as if their behaviour hasn't changed (not that that's a bad thing), though I would recommend that Podge maintain his ridiculous golf trousers rather than his even more ridiculous thong (it's actually nice to go to Whelan's and find something more interesting than a man preaching his self doubt to an audience of wannabe preachers).

They manage to have the crowd bopping by the finale, and 'Sad Songs' is a rather good song for finishing a set. It reminds me of a Snow Patrol song, 'When it's all over we still have to clear up', so that can't be a bad thing in my opinion, just as long as they don't sell out if they make it. And they should make it!