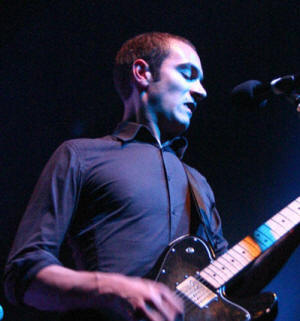 Review Snapshot:
"Look at us through the lens of a camera, does it remove all of our pain?" singer/probable V*l**m addict Tom Smith asks. Gazing through a camera phone tonight, all I could see was passion.

Full review: Rushing to the city centre at 6:30 p.m. (Doors 7:30 NO ALCOHOL SERVED, tee-total Ticketmaster kindly informs me), The Indie Bar Kid is resigned to his fate: it's going to be back of the queue. The queue for a band who had to upgrade the venue of their New York gig to four-fold it's original capacitys. As their new EP goes, "Who The F**k Are The Arctic Monkeys?".

On arrival at the Ambassador however I find I am not so much the rearguard of the queue as, well, actually being the queue itself. No die-hard fans sporting "People Are Fragile Things" tattoos, no boho fashionistas, no groupies. Not even a doorman. I might as well have just wore all red, lay down at the door and attached a sign saying "walk here".

And it isn't until midway through support act Gem (a rather we're-here-now-so-listen-up prospect with a we-may-just-be-going-bigger-places-too quality, ballsy, Dutch group; incidentally the singer's mother may want her jeans back, they were the only thing tighter than the band onstage) that the horde begins to amass. By the time the lights go down, Kanye West (now that's what I call crossover appeal) vinyl scratches off the turntables, and the cinema-come-venue goes momentarily silent (but for a bar-side girl shouting "What do you mean you've only got Club Orange?!?") you couldn't fit a bucket of popcorn in sideways.

The band begin with everything you'd want and expect from your 23.50 euros: maudlin, melancholic and downright danceable. However, tonight isn't a night for the album aficionados. While "Munich", "Blood" and "Someone Says" go down a shout-along treat with the latecomer crowd, they are weedy in comparisons to some of tonight's rarer additions. B-sides such as "Release" and "The Diplomat" make you wonder why the four-piece keep re-releasing their A-Side counterparts. New song "Bones" leaves yours exhausted and exhilarated. The centrepiece of the night is surely "You Are Fading". It's driving, mock-tribal drums pick you up and drop you down in a strobe-lighted jungle and the dragged out baritone warbling show a band stepping out of the shadows of their influences (so much cited are the Echo & the Bunnymen comparisons most articles resemble the back of a Donnie Darko soundtrack) and sewing a new flag for others to follow.

Only for the paroxysms of "You don't need this disease" of "Bullets", the luminescent "Lights" and the final thundering miserabl-isms of "Fingers In The Factories, "The Back Room" would be making its way towards your attic.

If the sweating and smiling horde (proof indeed that we get delight out of others' depression) pouring back into O'Connell Street clutching some kind of black coloured merchandise had foreseen tonight's performance I would have needed to be up at 6:30 a.m to get to the front of the queue.

"Look at us through the lens of a camera, does it remove all of our pain?" singer/probable V*l**m addict Tom Smith asks. Gazing through a camera phone tonight, all I could see was passion.