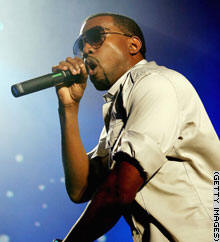 Review Snapshot:
Mr. West delivers an emphatic performance on his first night in The Point. The on-stage set up was as outrageous as Kanye's arrogance, but as with everything West attempts, the show was a success. He's brought a whole new dimension to the term 'rap concert'. Will be one of the gigs of 2006.

Full review:
Unlike a lot of rappers, Kanye West has a gifted ear for music. And his enthusiasm for great songs was the lasting effect from his first night in Dublin's Point Theatre on the Irish leg of his Touch the Sky tour. To cater Kanye's diverse musical tastes, he had on stage with him a nine piece orchestra and world champion DJ Eight-Track. As bizarre as this combination sounds, both provided appropriate accompaniment to West's energetic performance. He kicked off with Late Registration hits 'Diamonds from Sierra Leone' and 'Heard 'Em Say'. His College Dropout hit 'The New Workout Plan' really got the sellout crowd moving and Eight-Track deftly mixed this song into Eurhythmic's 'Sweet Dreams' - the first of many non-Kanye anthems in the set.

The orchestra got their chance to shine midway through the set - with a medley that included The Beatle's 'Eleanor Rigby' and The Verve classic 'Bittersweet Symphony'. The strings got a rapturous reception and came as a big shock - it was the middle of a rap concert after all! West has certainly redefined rap and you can see this from the diversity of his audience, which varied from stoner hippies to scanger howyas to IT Consultants. West then gave us a quick synopsis of his CV as a producer, with snippets of hits such as Jay-Z's 'Encore' and Dilated People's 'This Way'. There was more messing later in the set as Eight-Track dropped 80's classics 'Rock With You' and A-Ha's 'Take On Me', to which West displayed some funky dancing.

West really got down to business with 'Roses' and 'Hey Mama', songs dedicated to his granny and mother. 'All Falls Down' was a real crowd-pleaser but the highlight of the set was 'Gold Digger'. Eight-Track eased in the track with a few lines from the Ray Charles' tune sampled in the song, then into Jamie Foxx's sample, then the killer bass was dropped and suspended a bit longer to tease the crowd. Some songs are indeed better live. West wrapped up before the encore with 'Jesus Walks', its powerful video playing on the big screen above the stage - of course I couldn't see this screen from my seat in the balcony. The Point? It really is a shit venue.

West delivered a 3-song encore, ending with the ultimate feel-good song, 'Touch the Sky'. In all, he did nearly 25 songs in his set. The only negative from the gig was that he performed a lot of average songs, such as 'I'll Be Late For That', 'Celebration' and 'Addiction'. But when Kanye's good, he's the best. As with all big Irish gigs of late, there was the obligatory 'Ol?Ol" chant and of course Kanye waved an Irish flag around, whilst rapping about drugs - very surreal.