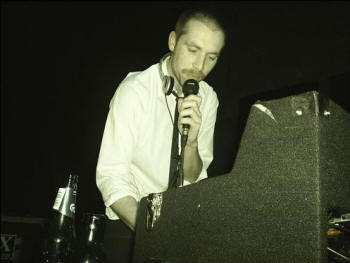 Review Snapshot:
Billed as a merry jaunt "down the road less travelled," this was St Patrick's Day Balkan style. In the self proclaimed capital of culture, right in the heart of the People's Republic the Triskel Art Centre played host to Yurodny, an instrumental septet lead by Nick Roth, followed by DJackulate an oddball DJ with a passion for swing. It started off slow, finished up funky, and was ultimately let down by the venue.

Full review:
Cork City Centre, Paddy's night, 10 o'clock. To say there was energy in the streets would be understatement personified. Clubs were jammed, crowds were heaving, and despite the rain, expectations were high. Walking into the Triskel Arts Centre was like stepping into another world, at first it was welcomed, calmness in the hurricane, and the promise of great music. A quick trip around the venue revealed a very empty place, and a "performance space" presumably designed by some Soviet era stalwart with a degree in "sucking as much fun as possible out of a room." With a relatively small turn out, the stage was set for disaster.

Yurodny are clearly very talented musicians, they play well together, with a speed and precision that is hard to fault. On paper they should be excellent, unfortunately, in practice this is not always the case. The music comes across as "that" type of jazz, technically proficient, in some cases astounding, but really lacking the personality, and the sense of adventure needed to kick start a live show. At times it did come together; the crowd were on their feet and swirled to a dancing frenzy with a fantastic cover of Taraf De Haidouks, and a flat out encore. At other times it was meandering, unfocused, and more than a little too "cool." Yurodny are probably better all round musicians than their most obvious competition, The North Strand Klezmer Band, but they lack the personality and life blood needed to set them apart. It seems they like the music but just don't "get it," something vital is lost in the translation.

Up next was DJackulate, resident DJ in Dublin's Dice bar, and Sin - and saxophonist for the North Strand Klezmer Band. From the start it was evident that quiet appreciation was not his thing, and with a resounding "Dolomite motherf**ker!" he launched into an upbeat set that was the exact opposite of what had gone before. The crowd responded in kind, two (stunningly) gorgeous belly dancers adding a taste of calming exotica as frenzied dancing kicked off. For all too short a time the Phoenix rose over Cork City.

Unfortunately the night itself lacked the kind of power needed to make it great. Yurodny were good in parts, but perhaps better suited to a more down tempo, jazzy crowd. Djackulate was pretty much perfect, working the crowd higher and higher, clearly well versed in the riotous folk language of the Balkans. This is the first all Balkan set I have ever heard, and it was great, emphasising the raw appeal of a music that is pure dance. The crowd were good, throwing it down in a sweaty frenzy, but ultimately they were too few. Without the seats, the venue could have held much more, and comfortably lent itself to the dancing that this music inspires. As it was it was too sterile, with a bigger crowd perhaps it could have been great.

All in all good times, what started off ominously finished with a bang, it just lacked the killer ingredients.