Live at the Festival of World Cultures, Dun Laoghaire, 26 August 2006 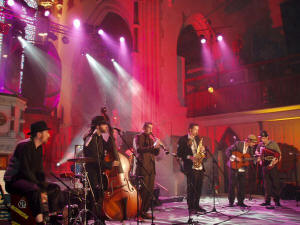 Review Snapshot:
"You should dance, 'cos, it's eh, dance music!" with no more encouragement needed tables and chairs were passed back over a sea of bopping heads, as the North Strand Klezmer Band took over the stage, and pulsed out an infectiously bizarre blend of gypsy and swing. The Festival of World Cultures had thrown out yet another wonder, and this one, remarkably, was home-grown.

Full review:
By 9 o'clock Saturday night the Dun Laoghaire Festival of World Cultures had already dished out some amazing performances, with the outdoor stage from 4 o'clock on proving a breeding ground of eccentric ecstasy? all fluid tablas and stabbing sax. Naturally limbs were weary from full funk dancing and a restorative pint in Walter's managed to smooth over the rough edges in what was to prove the calm before the storm. I was here to see the North Strand Klezmer Band, proven purveyors of gypsy tinged debauchery who, judging by the crowd, were a relatively unknown entity this far south of the Liffey.

Walter's was a remarkably poor choice in venue for this outfit, perhaps their "gypsy swing" tag had evoked images of smouldering waltzes, and easy listening background folk. The dance floor was tiny and narrowed to a tight point, hitting the stage flush amidst a tangle of restaurant paraphernalia. The error proved dramatic as after the first few songs of overblown debauchery, any available space was overcrowded with heaving, sweaty bodies. Soon tables and chairs were crowd surfed back and the dancing broke loose and uncontrolled. An overawed percussionist caught up in the moment, later described it as "the best moment in my musical career," and something special it was.

I am in no way acquainted with gypsy music, apart from the odd busker and a recent introduction to (the amazing) Gogol Bordello, but at its heart this is folk music? lively and unrestrained. It draws immediate parallels with the unbridled fun of the Pogues at their fastest, or the kicked out hoe-down of American bluegrass. All folk is music steeped in history and tradition, perhaps that is why it connects so immediately, well this is all that and more; energetic and so full of the joys of life.

Simply put, this was fun. Amazingly good fun, and, judging by the crowd reaction I wasn't the only one suffering from near orgasmic ecstasy. The band left Walters a sweaty mess, and later stopped traffic as upwards of a hundred people stopped to hear them busk, and to dance in the street. If you saw the scenes in Burger King you'll know what I mean? infectious and more than a little bizarre.

The North Strand Klezmer Band are highly recommended, if you're looking for all out fun coupled with a good old shimmy, check them out. But bring a spare t-shirt.