This article was first published on CLUAS in November 2005 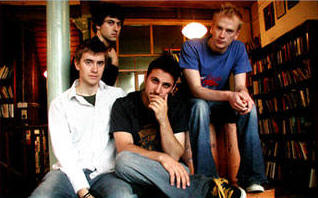 Daragh Murray caught up with Delorentos a few hours prior to the launch of their debut EP, "Leave It On", in Whelan's (see the thread about this launch gig on the CLUAS discussion board). When the discarded sandwiches were cast aside, the pints poured, and the tape turned on, it went something like this?

Well first things first, did you know www.delorentos.com can "help you find a real sex partner in Dublin?"

Níal: Yeah, well you know we try to give back to the community as much as we can.
Kieran: Well if you don't have sex at a Delorentos gig, you can have sex on the website!
Níal: What happened was some guy bought Delorentos.com?
Kieran: We got it in '99 but then things were going kinda slowly so we didn't have the money to do anything with it. So yeah, it's a bit annoying! But www.delorentos.net? It's all there!

When did you start playing music originally, and when did the band come together?

Níal: The four of us were all in different bands before, some of us with each other. We actually took the name Delorentos from an older band which a couple of us had been in. I live next door to Ross, it's kind of just a weird web of bands through schools and colleges, until the four of us came together.
Kieran: I started playing with Ross about '99, Níal joined the band we were playing with shortly after that. We did that for a while, but it didn't really work out, then Ross played with Ro for a while, and Níal and Ross had played in a band before as well. So we were all hanging around, all wanted to make music, so we just said well what do we want to do now? So we just sat down and said let's do this.
Níal: Around that time Ro was working in France, and once he came back we all got together pretty much straight away and ended up going to Chicago to play a rake of gigs.

And are you doing it full time now?

Kieran: Well as much as we can, Ross is in college and Níal does a couple of days a week, but we treat it as a full time thing. It's band first, work second.

Ok what about your musical influences, favourite gigs, the bands that made you want to get into music?

Níal: Well the four of us listen to really different types of music. Myself and Ro like The Band quite a bit, although that doesn't really come across in our music, and myself and Ross like the Red Neck Manifesto a lot, so the mixture all comes together.
Kieran: We like to take different types of styles, a couple of our tunes are dancey kind of things with break beats.
Níal: Our earlier stuff had a lot more dancey beats to it, but we're always chopping and changing.
Kieran: The newer songs don't sound like anything else in the set at the moment, and the first song doesn't really sound like the song we wrote before that, and the oldest song in the set is probably "Leave It On" and that's only about 8 months old. One or two of the songs we've only played once before, it's kind of like, this is what we do and we have to do it our best to write as many as we can, the best we can, and perform as well as we can too.

Apparently you used to do a cover of Bootylicious too?

Níal: [laughs] Yeah, we did this gig when we were over in Chicago called a "hoot" night and it's an American thing where the idea is to get 12 bands and you have a theme for the night, so it might be Madonna v Destiny's Child, and everyone has to do their own take on the songs.
Kieran: It's interesting too, doing covers is a good way to try and put your personality into songs.

Are lyrics important to your music, or would the focus be on the melody?

Kieran: Well for us it's the whole thing. The instrumentation, the mood, the lyrics and the melody, we work on them very hard. Sometimes we argue about lyrics, sometimes about instruments, we argue about everything, because we think it's important to get it all right.

And do you write together?

Níal: We don't really do anything in one set way, sometimes someone will come with a complete lyric, other times we just piece them together bit by bit?
Kieran: ?Although recently a lot of songs have been composite, one person will work on one bit, another on another bit, and then we'll jam it all out. Then someone might have a problem with one part, and we'll focus on that 'till its perfect.

Ok, and what do you hope to get out of music, what are the ambitions for the band?

Kieran: Well, to be in a band.
Níal: To be a musician, it's like that thing from the Dylan documentary, he wrote the songs cos he had to play them. We're into it because we love music, we like making music, and that's the only reason we want to do it.
Ross: And to play to as many people as possible?
Kieran: When we do get around to recording an album, and there's someone listening to it in a room and enjoying it, that would be the point.

Níal: We'd like to play the Electric Picnic? [laughter]
Kieran: Rock in Rio! Oh, there's one in Georgia on an old oil tanker that you have to get boats out to, that would be cool.
Ronan: The Pyramid Stage wouldn't be too bad?

Your recent EP release, Leave It On, is it an entirely independent release? How did it come about?

Níal: We scraped the cash together to record it at the start of the year. Kieran was working at the time and he pretty much shouldered all the cash and we've been paying him back bit by bit. We're all fans of indie music and there's a healthy enough scene in Ireland at the moment.
Kieran: We release it on our own "Delo Records" label, and got "Cottage Records" to distribute it, so it's kind of a joint release with them. But we covered all the other stuff, like posters, so hopefully a few people will go to the gigs now and we can pay it all off!

A number of Irish acts have released independent singles in the last while, yourself, The Urges, The Mighty Stef, The Things, do you think this is an important way of getting yourself known, especially when the music industry isn't paying much attention to Irish acts?

Kieran: Well you have to go on yourself, you can't just wait for things to drop into your lap and happen. If we want to release a CD we'll have to do it ourselves. It's the same with everything, if we want to put on a gig we'll have to put it on our self.
Ronan: And we think our music is good enough that we would like to get it out there, and sooner rather than later.

And the student music awards? You won that last year, and you're going on to CD:UK at some stage?

Níal: Yeah that was kind of funny, we've been gigging around quite a bit for the last couple of months and we were lucky enough to do well in the National Student Music Awards here and were asked to go and play over in the UK. When we were over there the producers of CD:UK seemed to like the music and asked us to go on, if and when we release something in the UK.

Again in terms of doing it yourself how important do you think the online aspect is? Music forums, band web pages etc?

Ronan: Well I think for us it's very good, especially starting out. I like to go on the web myself, and a lot of interest about the band can come from these places. I think that especially over the last while with Phantom being down, it's really helped the entire scene, the online aspect has maybe helped keep it alive.
Kieran: If we could get on the radio we would, but it's all about getting the word out there. We'll send texts, emails, put up posters?
Ronan: And when you don't have much money for promotion our website is definitely the best kind of tool we have.

And are there any plans to maybe sell your music online?

Kieran: Road Records actually have it online at the moment, so there's that?
Ross: If we knew how we probably would!

You're releasing a single, you've played big gigs here and abroad, supported big name acts, received a level of critical acclaim and air play, so what's next? Is there some sort of master plan, or are you going to keep on keeping on?

Níal: Ha, the master plan is top secret I'm afraid.
Kieran: We're doing as much as we can, it's kind of a cycle that's repeating itself, write songs, play them live, record them.
Ronan: Early next year we hope to have the best part of an album out, and hopefully play some bigger gigs, maybe get over to the States, and play any festivals we can next year, just build it up that way.
Kieran: We'd love to play CMJ in New York,
Níal: - and SXSW.
Ross: We just want to go on from here, its great doing what we're doing and putting it out independently, doing the best we can, but do we want to be doing that in 12 years time?

Interview was conducted by Daragh Murray

Check out the CLUAS review of Delorentos live in Dublin in August 2005 (and also June 2005).