This article was first published on CLUAS in Apr 2003

Mattie Bolger of the Redneck Manifesto

Mattie tells Ciaran about the Redneck's plans and their next album... 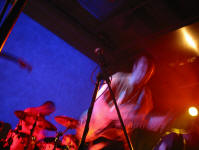 March 2003: With the Summer 2002 release of their second LP, 'Cut Your Heart Off From Your Head', The Redneck Manifesto have confirmed themselves as one of Ireland's most original, exciting, and indeed goddamn brilliant bands. The fact that 'Cut your heart off...' was released less than a year after their equally mesmerising debut, 'Thirty-Six Strings', is further verification that they are one of the most talent outfits around. A recent - and long overdue - visit of the four-piece instrumentalists to Limerick provided an opportunity for Ciaran Ryan to catch up the Redneck's guitarist Mattie Bolger and to hear what's happening in the wonderful world of The Redneck Manifesto?

So Mattie, what are the Rednecks up to at the moment?

MATTIE BOLGER: We are playing a gig in the Temple Bar Music Centre on 6 March, with Daemein Frost, so that we can raise money to go over to the 'South By South West Festival' in America on the 10th. That's going to be a week of touring in Austin. That's the main thing happening at the moment.

The South By South West happens every year, doesn't it?

Yeah. It's a huge music festival that runs for five days over the whole city of Austin. Hundreds of bands from all over the world. Every single music venue is packed. Thousands of bands play all over the city.

Isn't there a large selection of Irish bands going over this year?

There was supposed to be, but of the bands we are close to, it only seems to be ourselves and Daemien Frost that can afford to go over. You actually have to pay your own way over. I think The Frames are going, and some other bands, but I'm not sure about that.

I read somewhere that the Redneck Manifesto felt that "Cut Your Heart off From Your Head" was sort of a companion piece to "Thirty-Six Strings". Are you working on a new record? And if so, will it kind of fit into that framework, or will you be experimenting a bit more?

The first two records did fit together so well, so we did decide to call them companion pieces. But the next one is going to be completely separate, a new direction. We have a new member, Neil O' Connor from the Connect 4 Orchestra, playing keys and other instruments to fill out the sound a bit more. It'll be our first big studio album, as all the albums in the past have been recorded in a studio in my back garden on rented equipment. We are hopefully going to travel to Black Box Studios in France to record, so this will be the first time we'll be in a real studio, apart from Alan O'Boyle recording in my back garden! That alone is going to mean it will be a much higher quality, sound-wise anyway. We are going to spend a lot more time on this one, because the last two records only took three days to record and one day to mix. There wasn't a lot of time for experimentation. It was mostly just laying down the guitars, the bass and the drums. Any overdubs were done during mixing.

You just mentioned that you worked with Alan O'Boyle, who is in Decal. How did you get involved with him, as they are a different type of thing to the Redneck Manifesto?

He has been recording bands for a while. He actually lives down the road from us. We are all from Crumlin, except Mervyn who is from Dundalk. We've known Decal since we started. He did sound at a venue called the Funnel Bar, which is gone now. We did our first gig there, and he did sound for that. Dublin is a very small town when it comes to musicians. It doesn't really matter what genre of music you are into, as everyone seems to be connected in some way. We've always loved Decal. It actually goes back at least eight years, when Niall was in Jackbeat and Flexihead and some other bands, and Alan was in In Motion and some other guitar bands.

Will you bringing him with you when you go to France?

Hopefully. If he has the free time, and we have the money! He knows our sound, and he knows how to set us up. We would definitely rather bring him over. He is more into the electronic side of it, and he would be able to give us some advice. He knows what we want, and he has been working with us for the last three years. He recorded our first 7". Actually, I think he has recorded everything we have ever done!

For the amount of time spent recording the records, the sound quality is fantastic?

Yeah, that's true. To record one of our albums only costs about €1,200 from start to finish. We could of got about seven albums out of ten grand! We have a very low budget. We practise a lot, which makes the studio process a lot faster and a lot easier.

You just said that you record on a low budget, and you do everything independently. Are you going to stick to that route?

Well, we would love to maybe go to a bigger independent label. For the next album, we are going to through it around a bit more. There are some labels that we have liked for a number of years, and they treat their artists right. They have morals, and they stand by them. We are not going to go signing to Sony or anything like that! As long as we have complete control over the music. If we found a bigger label, with bigger distribution, that would give us that control, then we should move on.

Are you surprised that after years with other bands and so forth, you seem to be getting this huge reaction across the country? Is it surprising that it has taken off outside Dublin?

Oh yeah. It is actually very strange, because we have never hand any kind of distribution deal. Records that get sent outside of Dublin are sent by us, or close friends. When we are touring, we will give records out to people. We played in Kilkenny six days ago, and there was a fair few people there. It's so strange when you go in there and people know the names of the songs. We get e-mails from all over the world, and you start wondering how a small run of albums can get so far. There were only 500 copies of our first 7" but we still got an email form a guy in Alaska, and a guy from Toyko, and another form Indonesia! The reception we are getting is comforting. It is just amazing that people are accepting it, and turning up for gigs, or buying the records. We are a bit lazy about that. There is still loads of records sitting in my shed! It's kind of hard to find time because I'm in college, the other band members are working full time. We don't have a manager, so we have to organise everything ourselves. Some of the band have kids as well. Hopefully for the next album that is all going to change. We are going to look for a bit of outside help, and get a distribution deal, so that people can get the records!

Mattie Bolger of The Redneck Manifesto was interviewed by Ciaran Ryan

Photo above is credited to the Redneck Manifesto's website http://homepage.tinet.ie/~redneck1/