A review of his album 'Songs From The Gasstation'

This Dundalk singer/songwriter has been lurking in the shadows of the Irish scene for two years now. Even though he has played alongside Beth Orton, Ron Sexsmith and Rodrigo y Gabriela, he has managed to stay out of the spotlight. Whilst touring with Damien Dempsey, he sold over 500 copies of his EP 'First Draft' yet it wasn't until the release of his debut LP 'Tailor Made' that people started to take notice of him. 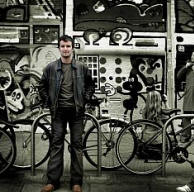 His new album was recorded in The Gasstation Studio, Toronto (which is where the album's title comes from) the studio was recommended by Ron Sexsmith. Sexsmith actually lends his vocals to both 'Gypsy Girl' and 'I Give You Hope' and his piano skills glisten on 'How Hard We Fall'. Although the spotlight finally falls on Agnew and shows his progression, not only as a songwriter but also as a musician as well.

'Down To The Wreckage' opens the album with a hushed softness that is followed by a pleasing, upbeat 'Tin Can Morning'. Each song is bound with a simplicity that allows the reserved instrumentation to compliment the lyrics. Agnew's writing is on top form but his vocal style changes like the Irish weather. To describe his singing would be to take a slice of Springsteen, a sprinkle of Young and a dash of Ryan Adams and fuse them together. 'Lonesome Road' and 'Just A Little More' both scintillate as higher tempo tunes while 'Heartbreaker' and 'Sink Or Swim' flow like harmonious lullabies. The Sexsmith assisted 'I Give You Hope' has a charming feel to it with a sweet-sounding harmonica. The real standout track though is 'Porterhouse Blues'. Its infectious chorus of 'And I'm sitting on a bus / singing Elvis songs / And I don't feel like a fool / 'Cause everything's alright / Everything's alright / when I'm sitting next to you', will have you singing along in no time.

Agnew has produced an album laudable of being one of the year's best breakthroughs. While it is a much more mature record than 'Tailor Made', it still seems that he has more to offer.