A review of his album 'Jacksonville City Lights' 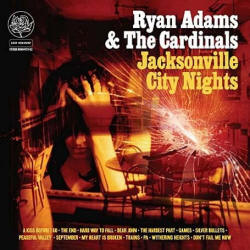 Review Snapshot:
Ryan revisits his roots with new album, Jacksonville City Lights. The faux-rock of previous outings are left behind in favour of heartfelt musings on lost love. This isn't alt-country it's just country and it suits him perfectly.

Full review:
You never know quite what to expect from a Ryan Adams release. Once the darling of the music world, he was heralded the next Bob Dylan at just 19, while fronting alt-country band Whiskeytown. Adams' first solo outing, 'Heartbreaker', released in 2000, cemented his reputation as country's most damaged prodigy. Since then he has fallen in and out of favour with critics and fans alike. He has a tendency to release everything he records and it's not always warmly received. Ryan is often described as a prolific songster who borrows from, mimics even, the likes of Gram Parsons and Paul Westerberg from The Replacements. Here it seems like he has found his own voice.

Originally titled September, this second album 'Jacksonville City Lights', from Ryan and The Cardinals, follows in the country vein of the double album 'Cold Roses' which was released earlier this year. It came out with little fanfare and avoided the drama of the 'Rock N Roll' and 'Love is Hell' release debacle of 2003. Maybe Ryan Adams is finally growing up and certainly this is one of his best albums in recent years. The haunting ballads remain in your head long after you put the CD away and the upbeat songs deserve careful listening as they veil sadness and despair with their swinging guitars. Unfortunately it doesn't always work and a duet with Norah Jones pales when compared to previous duets with the likes of Emmylou Harris and Marianne Faithful and 'Peaceful Valley' sounds a little whiny, though the rest of the album more than makes up for it.

'Jacksonville City Lights' opens with 'A kiss before I go', counted in by Adams and sweet guitar and drum beats swing into action before Adams crackling voice croons "The engine turns on a dime" and the tone is set. It signals the continuation from 'Cold Roses' and firmly closes the door on the faux-rock of 'Rock N Roll'.  'The End', or Jacksonville as it will probably be known, continues the theme and waltzes through cotton fields, diners and the Pentecostal pine. It's Americana at its best. Some of the lyrics are squeezed in to fit the song but overall it works. In 'Hard Way to Fall' he backs a little away from the extreme country sound of the first two songs, sounding more like the older Ryan from 'Gold' and 'Jacksonville City Lights'. The Dear John letter from Ryan and Norah covers miscarriage, debts and separation. It's tragic love song tied into everyday life.

'Silver Bullets', a piano ballad, opens like a track from 'Love is Hell' as Ryan mourns the end of something that can never be regained - "and I can't make you love me / and you can't make me stay". Regret and heartache, which fuelled 'Heartbreaker', are still very much to the fore of Ryan's writing.

'September', initially the title track, has a pretty harmony and once again mines the lost love territory and ends up desolate by a gravestone. 'Heart is broken' is up-tempo despite the sad lyrics. 'Pa' tells the story of two parents dying and empty seats at the dinner table, as he sings out the bittersweet sentiments with a "Sha La La La" chorus. The album closes with 'Don't Fail Me Now' and a bonus track of 'Always on my mind', the song made famous by Elvis. It's a mixed bag but fans of the older Ryan should be pleased. You might miss the unpredictability of the wild Ryan, but the quality songs, tight production and superb playing of The Cardinals should keep you satisfied.