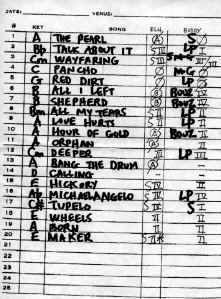 Here we are, the first night of Emmylou's "Red Dirt Girl" European tour and Ms Harris, almost immediately once she hits the stage, volunteers to the audience a certain lack of confidence about her song-writing skills ("Red Dirt Girl" is Emmy's first album in 25 or so years that has her writing almost all the tunes). She need not worry, the most powerful and memorable moments tonight were provided by some of the "Red Dirt Girl" material. (Aside: all the emotional energy she spent worrying about her new songs would be better focused on improving her stage dress sense - a hideous brown C&W skirt with a diamond-shaped tail is not made any more appealing by a pair of pixie boots, not that I'm anyone qualified to be dishing out fashion advice...).

Anyway, returning to the gig. Spyboy as backing band (with Buddy Miller on guitar who also supported) provided a simple drums / bass / guitar arrangement that managed admirably in recreating on stage the dense studio textures of her 2 most recent albums. The instrumentation may be one thing but its nothing compared to that voice. An instrument as powerful and moving as any. To see Emmy Lou Harris on stage and hear her perfectly deliver a lyric with that unique and fragile phrasing of hers, to witness the unmistakable timbre she posses as it soars with the notes is - if you excuse the clich?- spine-tingling. The buzzing vertebrae were much in evidence tonight during the new tracks 'Michelangelo' and, in particular, 'Bang the drum'. The latter was delivered solo with Ms. Harris gentle strumming on an acoustic guitar, such stark simplicity only serving to emphasise the song's poignant lyric of, that old chestnut, filial regret.

The only blemishes on the night (as we diplomatically forget about that dress and those pixie boots) were the band's occasional tendency to rock out (man) at inopportune moments in some of the more delicate pieces. There was also at the end of the night an incredibly naff drum solo and an even more insufferable bass solo. Hopefully they'll have such flights of ludicrous fancy out of their systems by the time they hit Dublin's Olympia theatre on November 27th. It's sold out already so if you haven't got a ticket the advice would be to start praying that another date is added by the relevant Gods that reign over such fine matters of the musical world. Amen.