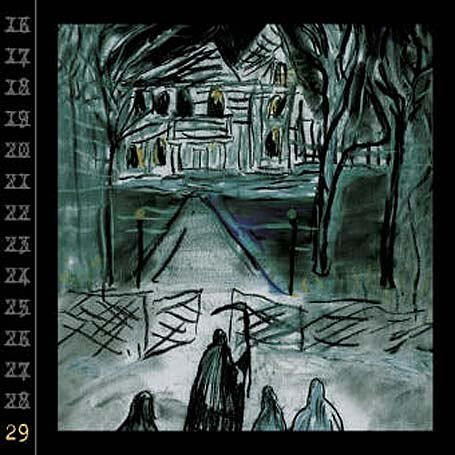 Review Snapshot:
The "Best Ryan Adams album of the year" is a new category that has been added to the best of lists for 2005... '29' is the album for all those who hark back to the day, when Heartbreaker was your album of choice as you drank a bottle of whiskey and reminisces about that "damn girl." 29 is a fine bedfellow for this year's misery and it is his best in what has been a prodcutive year for the Carolina native.

Full review:
With the festive season upon us and the old reliable cracking out their 'best of the year' lists, they're going to have add a new category to this years list: "Best Ryan Adams album of the year". The alt-country poster boy has returned to form of sorts over the last twelve months. His first release "Cold Roses" with his new band The Cardinals was the kind of country rock honk that was enjoyable but not earth-shaking. While "Jacksonville City Nights", his sophomore effort for this year, was a journey in the Nashville country dive bars, full of peddle steel heartache and near on alcoholism.

Which brings us to this year's final - and best - 2005 album from the ever so busy Carolinian, "29". We are transported back to the time that Adams first entered our collective hearts on his own, back after his flirtation with the fabulous Whiskeytown. 29 is a nine-song collection, which according to its author is a journey through each year of his twenties.

Adams is reunited with Ethan Johns that man who produced his breakthrough album "Gold" as well as his achingly beautiful debut "Heartbreaker" which still remains his finest hour committed to tape.

This is an album for all those who identified with his debut, striped and shorn of an glossy production and backing band, Adams takes you on a heartbreaking trip through his twenties. The drizzly rain tapping on the window is evident as Adams wallows from pool of self-pity, falling deeper and deeper, over the course of this concept(ish) album.

The hard-drinking, party animal days of his twenties are teased and tossed out with regret of messing out so much of his life. The sparse arrangements let Adam's voice come to the fore, therefore also his lyrical content. "Is it possible to love somebody too much?" he asks in Starlite Diner ("You bet" he replies), accompanied by a lilting piano, you can almost see him, tapping out the notes in a dirty bar, cigarette slowly burning down to the butt, dishevelled and groggy with a whiff of whiskey emanating from his mouth as he pains to sing the words.

This type of lovelorn and scorned by love characteristic that Adams, radiates is bound to bring comparisons with Pete Doherty, but Adams accepts his own culpability for the wreckage of the littered relationships of his past.

The faux Mexican rhythms of "The Sadness" masks the apology for his past actions as he spits out the his own vision of himself "I am the horror that brings in the morning" and "The Sadness is mine, its why your not helping me".

"Strawberry Wine" one of the early highlights of the album sees Adams looking back on his hard partying day's and wondering how is still alive, when he knows he should be dead, and the guilt is eating him away.

It's not a masterpiece, but more a tormented vision that hasn't fully reached fulfilment, but seems to just deviate a little too much at crucial stages. But it's still a damn fine record, for those jilted lovers who can accept that they were partially responsible for their own demise. Culpability brings realisation and possible redemption. This has been a vintage year for Adams after the turgid dung that was "Rock and Roll", and the egotistical shows which nearly turned this writer off him for good.

29 closes a chapter on one man's life and we are being invited in to live it for a brief forty-five minutes. Go, on take a look. You won't regret it.