A review of their album 'Aaagh!' 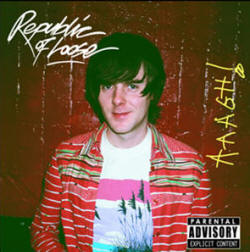 Review Snapshot:
First time I heard this album a short wonderfully plagiarized synopsis came to mind, "sh*t sandwich." I loved the Loose, and now this, man what the f**k had gone wrong?! But that was first impressions, now, after a few listens I'm not so sure. There is genius everywhere on this record, hell it's imprinted in the soul of the Loose, only this time it might be buried a little too deep, proving elusively and agonizingly inaccessible.

Full Review:
What to say about this album? On first listen I was shocked, what the hell had happened? This was most definitely not what I had expected. Parts were flaccid, cloyingly saccharine and some of it even sounded like the Backstreet Boys. Things were definitely not right. But after a few listens, something seeped through the excessive over-complications, and that something was ambitious, fresh, brilliant and bordering on the genius.

Much has been made of The Republic of Loose's huge range of influences and undeniable talent in pulling pure groove out of a bitches brew of styles. The raw energy of "This Is the Tomb of the Juice" proved that, with passion, dirt and flat out funk. This time round however, it just doesn't quite seem to pay off. The ambition is there, as is the talent, the dynamism and the groove, but it always seems to fall frustratingly short.

"Break!" is a perfect example of ambition gone horribly, dementedly wrong. It is just plain poor, coming across as some soulless take on the Black Eyed Peas. I'm not the Peas biggest fan but "Love Lumps" is an undeniably sexy, raunchy celebration of lust. It makes we want to hop on the bad foot and f**k. Hard. "Break!" however doesn't. At all. In fact it left me feeling a bit like the bewildered victim of a vicious hit and run twonking. Not pleasant.

But from these murky depths "Aaagh!" can only get better, and it does. Every now and then, something just clicks and you see exactly what The Republic of Loose were aiming for. And it is new, original and god dam good. "I'm Greedy" is a perfect example. The lyrics are pure RoL brilliance, "I might f**k you for a minute and a half?" It settles into a fluid groove and just when you expect it to dive bomb into dirty blues raunch, squeezing that lemon 'till the juice runs down your leg, it dovetails into a sugary almost Backstreet Boys like chorus. And f**k, it works. It mightn't quite get there, but maybe that glimpse of genius is even more enjoyable than the real thing. The main rap of "All Mine" is a lyrical rant of pure, unadulterated brilliance. It's modern day Dylanesque amphetamine psychosis poetry, with the added bonus that you know what the hell he's talking about. Man it is good. Damn good.

So in short, and in confusion, I don't really know what to say about this album. It aims high and falls short. Some people will probably hate it, and they would have a point, but me, I love it. It dances on the razor's edge of genius and mediocrity, wantonly flirting with both. I don't think that this is the album that will break the Loose, but that can only be around the corner and when that happens maybe "Aaagh!" will be looked on in a kinder light.

This album manages to be sexy, funky, funny, intelligent, insightful and disappointing all at the same time, and that's got to be rare enough to be worth it. I dig. Big time.