Here it is, the debut album from one of best acts on the Irish scene. The band's reputation has been built up thanks to their stunning live performances, which included a memorable set at the Cluas.com's 5th birthday party. Praise for the band has been echoing for months now with even the management team behind Oasis describing them as their new favourite band. 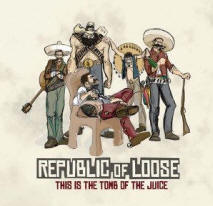 The first thing to strike you about their debut album is the picture on the front cover of the band portrayed as cartoon banditos. This image has been associated with the band's sound, with some people thinking that they can't be taken seriously. But let there be no doubt, the Republic of Loose are indeed serious and far from being a joke band.

Despite the muffled 'Intro' and the unnecessary 'Fuck Everybody', where lead singer Michael Pyro basically argues with Asha Allen over the band's influence from American music, this is a great debut album. The bluesy 'Kiodin Man' kicks things off with a fusion of rap and rock on top of a killer bass line. A laidback mood will quickly evolve from your speakers or headphones and you will find yourself swaying to the beat in no time as 'Hold Up!' introduces that ROL coolness. And 'Girl I'm Fuck You Up' stands out as the catchiest tune of the summer.

While some of the lyrics are sketchy, the music always maintains the same delectable flavour. A funky sound and an embellished keyboard along with an injection of 'Line Tree Arbour' by Nick Cave makes 'Goofy Love' the closest to a love song that they will produce. The more soulful side to the band is unleashed on 'Something In The Water', 'Sweet Cola Of Mercy' and 'Dial Jesus For Sweetness' where the gospel-like singing is complemented by the well executed drumming and guitars. A lot of the tracks like 'Tell More Lies', 'Ride With Us' and 'Black Bread' have a certain warm fuzzy yet gritty feel that is so addictive you just have to keep replaying the songs.

Prepare to be blown away. Prepare to tap your feet and move to the funky beat. Prepare to discover the Republic Of Loose.