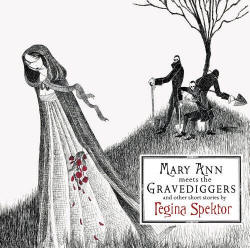 Review Snapshot:
Russian born and Bronx-raised, Regina Spektor draws on a mixture of her childhood, her observations of life and her classical piano training to produce something quite unique.

Full Review:
'Quirky' and 'kooky' are words often used to describe artists such as Fiona Apple and Tori Amos. These are, more often than not, thinly disguised accusations of being slightly 'barmy'. Regina Spektor sits somewhere alongside these tortured piano-loving ladies, and could certainly be found filed under 'e' for eccentric, but her music is never tortured or overly introspective. She has far too much of a sense of humour for that kind of carry on.

'Mary Anne' gathers together songs from Regina's three previous releases 'Soviet Kitsch', 'Songs' and '11:11' and unites them with the easy flow of a natural storyteller. Regina might be the queen of the New York anti-folk scene, but her folk roots shine through with this collection of intriguing characters.

'Oedipus' is a lilting, quite lovely opening track, with Regina's voice touching on the angelic. Often accompanied by little more than her piano, it is her voice that steals the show, pulling you in and keeping you in suspense as to where the story will lead next.

Her voice is harder in 'Poor Little Rich Boy' when she sings "You're reading Fitzgerald / you're reading Hemingway" and ends with the repeated scathing summation that her subject is "so goddam young." 'Sailor Song' is a drinking sea song for the high seas with "Mary Ann's a bitch" as its hook line.

Double bass begins 'Mary Ann' for a calypso-jazz hybrid. Regina's vocals shine here with Gitanes-smoking, beret-wearing, toe-tapping beatnik cool. "How he loved her apple pies, how he loved her meatloaf" is sung with a kind of 'American in Paris' musicality and leaving you half expecting Gene Kelly to match her Broadway soprano with a call and response.

'Prisoners' suffers somewhat for its sparseness and Regina's heavily accented language is at times grating. In the 'Consequence of Sounds' a near a cappella rap joins the subtlest of piano lines. The lyrics are tightly constructed, deceiving the looseness they seem to wish to convey.

There are no rules to Regina's music, no strict tempos, no set rhymes or rhythms. She shuns these to make the music she chooses, so beware the purists! Her subjects are dealt with irreverently and at times tenderly, but in 'Chemo Limo' the songs light hearted 'I can afford chemo like I can afford a limo' masks something far more sensitive beneath.

The album ends with recent single 'Us' and it's perhaps the only vaguely commercial sounding song on it. With its contagiously hiccoughed chorus and the glorious falsetto of "We are living in a den of thieves" offset by her broad NY accent and sense of humour, "They made a statue of us / our noses have started to rust," it's hard not to fall for the charms of this album.

Having opened for the likes of the Strokes and Kings of Leon, Regina may have been given an opening into a more commercial world, but one wonders how commercially successful an album like this can be? Perhaps, she doesn't seek world domination, but a quite snug from where to observe the world, tongue firmly in cheek.