Jenny Lewis with the Watson Twins

A review of their album 'Rabbit Fur Coat' 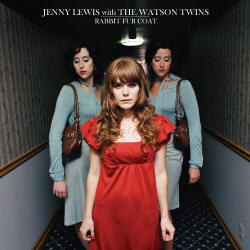 Review Snapshot: The girl from Rilo Kiley comes into her own as she gives us an album that even our resident country nut Rev Jules could appreciate. Not only one of the better albums of the year so far, it also is, for anyone into mild country-tinged pop, a good pathway to the delights of Rilo Kiley.

Full Review:
Rilo Kiley may mainly be known to viewers of The OC, but in the real world made up of more than just rich kids and their problems of who to date and what to wear, they are much more than another soundtrack to a scene. They write blissful tunes laden with delicious lyrics and melodies to match. This record sees Jenny Lewis of Rilo Kiley going it alone (or not so alone, the Watson Twins among others play their role) and whips up a new set of songs laced with a mild country tinge.

The acapella opening track 'Run Devil Run' could come straight from the 'Oh Brother, Where Art thou' soundtrack and it neatly draws itself into the march of the kick drum in 'The Big Guns'. Lewis' voice springs with the twang of Americana and cowboy boots at the end of the bed, with an air of trying to separate herself from her more indie-centred day job. But, as the 38 minute album floats on, its hard not to surrender to her voice.

Over-reliance on acoustic songs such as 'Happy', 'Rabbit Fur coat' and 'It Wasn't Me' can show this yearning to be a bit too rootsy, but the up-tempo numbers really do shine, especially 'The Charging Sky' which narrates the attractions and detractions of faith ("cause institution is like a big bright lie / and it blinds you into fear and consuming and fight / And it's just you and God but what if God's not there? / But his name is on a dollar bill that just became your cab fare"). There are many other allusions to both Christianity and secularism, such as during the track 'Born Secular' (on which The Watson Twins harmonising must be mentioned, it blending in so well with Lewis' voice, as it fades out with organ, drums and vocals).

Lewis' narrative skills are clearly demonstrated in 'Rabbit Fur Coat' centring on a fictional tale of a mother getting even with a spoilt daddy's girl. The highlight for me however is 'Handle with Care', a Travelling Wilburys' cover, which features Ben Gibbard, M. Ward and Conor Oberst sharing vocal duties. A glorious tune which unfortunately only clocks in at 3 minutes.

Perhaps a bit shoe-gazy in places, it's one of those albums that, when a certain lyric catches you, it can leave a smile on your face for more than a while. An above-average first impression which will hopefully lead more people towards Rilo and their brilliance.