A review of their album 'More Adventurous' 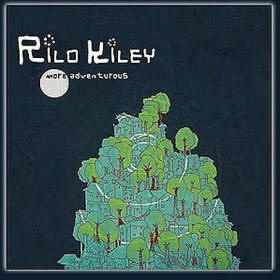 Review Snapshot:
Former Saddle Creek mates of Bright Eyes, Rilo Kiley reach further for commercial success with their first big label album. Containing the kind of lyrics and harmonies that makes this reviewer wish he was Jenny Lewis' boyfriend, it's an album of life niggling quirks in love and all the rest of the stuff that lingers in your mind that you just can't pinpoint.

Full review:
This is the second best album of the year so far, just after Arcade Fire, mainly due to its lag in the middle. With lyrics as gorgeously honest and poignant as these, it's hard to just even think how broken hearted people live with themselves.

Rilo Kiley consist of Jenny Lewis and musical partner Blake Sennett (plus some other musicians), who have weaved an album that deals with loneliness and how not to deal with it, sex, death of old friends, old boyfriends and contemplation on just about everything that is, was, will be and won't be.

This album covers just about everything from evolution to stating the obvious fact that George W. Bush is a monkey (all in the space of a few lines as well) on 'It's a Hit' (the trumpets will be whistled after listening so beware).

It's amazing how Lewis can be so direct yet maintaining enough details for our own imaginations to ponder for themselves. From the blatantly obvious ("and the talking leads to touching / and the touching leads to sex / and then there is no mystery left" on 'Portions for Foxes') to more modern wisdom ("I read that with every broken heart / we should become more adventurous") it sounds like she has learnt a thing or two.

All of these lyrics are made more affecting with the accompanying rock/country twinges which make most songs sparkle. The beautiful 'I Never' (destined to be sung by Ms. Lewis atop a piano in a slinky red dress surrounded by string sections) is an old time ballad from the 30s. When the music stops and its just Lewis solo bellowing an elongated "I" a shiver ran down my spine, you'll enjoy it that much.

'A Man/Me /then Jim' is a beautiful ode to a high school suicide and first love, it discusses where things went wrong and how the purity of a first love can come to an end bringing on the reality and harshness of love. It epitomises the album in a way, it'll make you think about your life in a way that will make you think 'this came from a record?'

Closing song 'It Just is' is a confession of how things are, much the same as 'Do you Realise' by the Flaming Lips, though not as introverted and weird.

Despite the lagging middle of 'The Absence of God' and 'Accidntel Deth' (both songs have fine lyrics it's just the tunes that aren't worthy of much mention) this is an album that will be up there with critics' best of the year come December.

It's a pity they haven't been given a better opportunity to present themselves to Irish audiences. If you don't have this you're missing out.