Hope of The States

A review of their album 'Left' 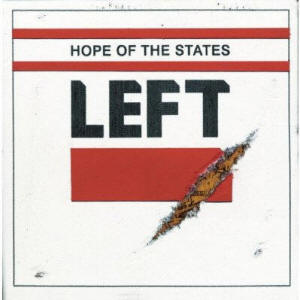 Review Snapshot:
Hope Of The States return with another excellent record. Whilst being a more rocked up album than the first, the delicate moments still remain. A contender for album of the year.

Full Review:
Initially Hope Of The States were branded as "the new Radiohead", but with the release of their debut album, The Lost Riots, in 2004 they rid themselves of that tag. The album's epic and ambitious sound was more in the tradition of Mogwai and Godspeed You! Black Emperor than their Oxford counterparts. It is a classic of the modern era, criminally over-looked by many. To follow it up was a difficult task, but Left is a blistering success.

The record opens with a short instrumental piece, Seconds, which could fool a listener into thinking that not much had changed over the last two years. This record is, however, a much different beast to their debut. 'Blood Meridian' marks this change. The post-rock experimentation is put aside as a more mainstream indie rock and guitar oriented sound emerges in its place. There is a sense of urgency and defiance in their songs now. It is also a more optimistic record than its predecessor. 'This Is A Question' is a prime example of this with a cheery almost pop feel to its chorus as Sam Herlihy sings "If you sing a couple of words / the world moves".

Lyrically, Left is a defiant and hopeful record. Songs like 'Blood Meridian' and 'Industry' return to the apocalyptic themes of the debut and depict a totalitarian society, a dystopia that they are hell bent on tearing down. Other tracks deal with themes of hope and self-belief - "All you cynics and all yr spite/You can all go to hell".

Sam has clearly done a lot of work on his vocals. While I enjoyed them, many were put off by his often-straining vocals on the debut album. His voice is much stronger and more powerful now. The gentler songs such as "January" benefit most from this as his voice accompanies the doleful piano beautifully.

At times, one might feel that Hope Of The States are becoming somewhat formulaic. 'Bonfires', 'Four' and 'Sing It Out' all follow the same trademark verse-building-to-big-fiery-chorus structure. That said an album written entirely in this mould with be better than the majority that clutter up the charts nowadays.

There is a dual-disc edition of the album available, which includes on the DVD a tour video called 'The 547.5 Day Journal'. It is 28 minutes of footage of Hope Of The States on their numerous tours with an accompanying soundtrack composed by the band. It is a brilliantly directed piece with music to match. It sees the band experiment with post-rock once again as the dramatic crescendos and sweeping violins return. It is some of the best work Hope Of The States have done to date, and is an essential listen for any fan.

The only disappointment on this record for me is the closer, "Church Choir". It starts so promisingly but it gets somewhat lost about halfway through. However this is mere nit-picking as this is a fantastic record that captured my heart and my mind. At times it makes your pulse race, at others it is heartbreaking. Left has established, in my mind, Hope Of The States as one of Britain's most exciting bands. I am sure that this is an album that I will keep returning to for many years.