A review of their album 'St. Elsewhere' 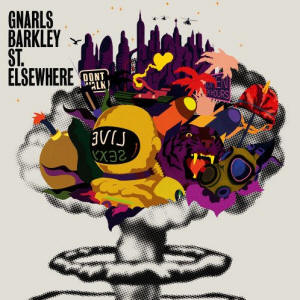 Review Snapshot:
Two unlikely characters had everyone fooled into thinking that Marvin Gaye had been reincarnated as an enigmatic yet mysterious figure named Gnarls Barkley who was rumoured to be doing elaborate things all over the place, but only the slightest glimpse of the man's shadow was ever seen. Now though that we know the truth, it doesn't take away any of the enjoyment and genius of their music?

Full Review:
So, if you haven't heard of Gnarls Barkley yet, well, umm? No, no words can describe. You must have been living in a hole 40,000 feet beneath the sea with earplugs in, or you're just plain Crazy! (Too cheesy, Uh huh). But, it is sensational isn't it? 'Crazy' has seeped into the minds of everyone everywhere, and whether you're into it or not, you've got to admit there's some class there.

The Kooks have covered it, Ray LaMontagne has covered it, it has become the first ever download-only no.1 single and it is one of the most seminal songs to have been released in years. It is track number 2 on St. Elsewhere, the debut album from the surprise duo Gnarls Barkley: the ubiquitous, sought-after, sensational beatsmith and producer Dangermouse; and the man with Marvin Gaye's voice, Kanye West's wit and the soul of a church filled with passionate faith, Cee-Lo.

The album isn't merely a few other songs chucked onto a record to surround their unquestionable hit though; it's much more than that. There are one or two throwaway numbers, like 'The Boogie Monster', which is slightly charming but doesn't quite live up to their already highly prestigious and established name, but most of the record is pure gold.

The likes of 'Smiley Faces' and 'Gone Daddy Gone' get you in the mood to dance and be happy, the latter having a sort of Inspector Gadget theme feel to its melody, whereas 'Just A Thought', with its intense percussion and gripping tune, gets you thinking and nodding your head rhythmically and meaningfully. It's one of the best examples, other than 'Crazy', of Cee-Lo's brilliant way with shaping and articulating his very clever words; little teasers like "it's deep how you can be so shallow" on 'Who Cares?' just grab you by the brain-cells, so simple, yet so effective?

Dangermouse's wizardry on this record really sets him apart from the crowd; as he proved with previous efforts such as The Mouse and The Mask he's a man of extreme talent, but there's some unequivocal mastery worked into Gnarls' St. Elsewhere. And it's the same with Cee-Lo, as great a rapper as he is a singer; he has a voice to die for when he goes there? They're an enigmatic pairing, with a great unabashed sense of humour (their press photographs of them dressed as famous film-characters being proof of this), and a musical bond that's as strong as that which has existed between the best.

No one expected it, but we're all very thankful for it. Gnarls Barkley have really brought something to this year of music and made it unforgettable, a show to definitely see live and St. Elsewhere, an album to definitely have in your collection. It may not be as addictive as its lead-single, but it will be picked up regularly and will be gathering neither dust nor moss on the shelf.