A review of his album 'Trouble' 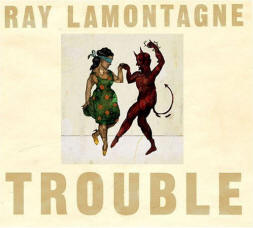 Review Snapshot:
LaMontagne could quite possibly be the most stirring solo artist to have emerged over the last few years. Incorporating the vocal distinctions of early Van Morrison, late Tim Buckley and 'Street Legal' era Bob Dylan, the songs marry intimacy with a suave craftsmanship.

Full review:
After a rocky childhood, in which his parents spilt up and his mother moved her six children around constantly, LaMontagne developed an unease of connecting with people. His shyness saw him creep away from society to earn an unfazed living in a shoe factory in Maine. When his clock radio erupted with the soft sounding 'Tree Top Flyer' by Stephen Stills some four years later, he sat up and paid attention to the song. The song made such an impact on him that he went out and bought Stills' album and decided to pursue other similar artists along the lines of Dylan, Young and Reading. His newfound passion for music prompted him to quit his job and begin his own song-writing adventure. That adventure is encased in all of the wonderfully structured songs on his debut album 'Trouble'.

For a singer/songwriter, LaMontagne has it all - superb vocal capabilities, great timing, impressive instrumentation and above all excellent song-writing skills. His talents are exemplified on tracks such as 'Hold You In My Arms', 'All The Wild Horses' and 'How Come' where his astute lyrics are unmasked through his distinctive singing. The quiver in his raw vocals brings about an odd comfort level that is easy to adapt to for the listener. The way in which he wraps his vocals around the lyrics and masters them alongside the back-up instruments (which include violin, cello, percussion, piano, drums, bass and harmonium) is a timeless trait that not many singers possess. On each of the ten tracks, he tames and exploits the vulnerability in his voice to such a degree that it is impossible to ignore his flair for relating with the listener.

While not stealing the spotlight away from the artist, an immense amount of kudos should be rewarded to producer Ethan Johns. Johns, who has previously masterminded the successes of Ryan Adams and Kings Of Leon, played various instruments, oversaw string arrangements and helped bring the best out in LaMontagne. The clever and effective usage of violin on most of the songs, the inclusion of Jennifer Stills (on 'Narrow Escape') and Sara Watkins (on 'Hannah') on backing vocals and the rugged yet tender feel to the songs is all down to Johns' knack of producing a great album.

Themes of hope, insecurity and heartbreak are common ground for singer/songwriters to prey on but LaMontagne creates rousing ballads from the usually over-stretched subject matter. His lyrics are simple but perpetually compelling, like when he sings 'Who am I to tell her? / Who am I to play God?' on the beautiful 'Forever My Friend', he doesn't out step the poignant limitations that guard his song-writing. He masters the main objective that every singer/songwriter tries to achieve: writing from the heart and making the listener connect with what he is singing about.

Although it is only ten tracks in length, 'Trouble' is a rare opus of finely harboured songs that have an emotional and cinematic desirability. A flawless album if they're ever was one.