Review of his album 'Where Shall You Take Me?' 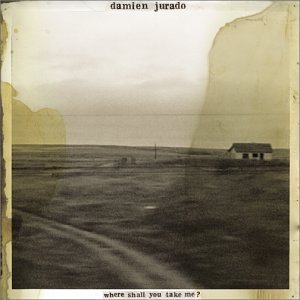 Countless songwriters explore the darkest aspects of life. Regret, betrayal, loneliness, depression, violence, sickness, death - it's all quite common fodder really. Not many though write with such stark conviction that the music moves, scares and excites you all at once. Mark Eitzel, Mark Kozelek and Kristin Hersh are glorious exceptions and Damien Jurado is a name you can add to that list, never more so than now, with the release of "Where Shall You Take Me?", his bruising but beautiful new album.

Jurado's 1999 record "Rehearsals for Departure" earned him a distinct reputation, with its intriguing mix of rollicking bandpop, quietly epic balladry and naked folk acoustics. The following year he released "Ghost of David", a home-recorded lo-fi masterpiece, which features songs of unfathomable sadness and eerie elegance (its opening track 'Medication' is the most distressingly melancholic yet gorgeous song you'll ever hear). His last release, "I Break Chairs" is a roasting rockout, but the current record finds Jurado recalling the forlorn atmosphere of songs like 'Ohio', 'Curbside', 'December' and 'Tonight I Will Retire' from those 1999 and 2000 albums.

"Where Shall You Take Me?" opens alarmingly with 'Amateur Night', and its telling leading words "First came the scream / And blood on the floor". An ostensibly gentle acoustic number, it reaches an unsettling climax, with swelling keyboards enveloping the increasingly withered vocals. Right from the off you know this is no ordinary album.

'Intoxicated Hands' echoes the thinly veiled violence of 'Amateur Night'. Quietly menacing guitars and lullaby keyboards create the odd soundtrack to a tale of love gone horribly wrong, with the protagonist crying "Shame it took that whiskey baby / To bring me to your door". The rich music and vocals tease you into a world of intimate terror.

This is even more true of 'Abilene', with its charming acoustic picking and delicate, lingering piano lines. The melody is a delight, but the story being told is a frightening one, with "a girl of nineteen" whisked at night by "a man without money". What is not clear is whether Abilene is taken away forcefully or willingly, making her closing line all the more disturbing - "Where is it you shall take me? / Is it in the mountains high? / Or is it the deep blue sea?"

The deliberate absence of full narrative detail in these songs lends a chilling weight of uncertainty and ugly mystery to the stories being told.

Elsewhere, Jurado's heart simply shatters to the floor. The self-explanatory 'I Can't Get Over You' would be quite an unremarkable song were it not for the sheer despondency manifest in his quivering voice. 'Tether' is a gorgeous acoustic lament with a tender melody so intimate it melts. It is a folk song of humble, sorry sadness, in the spirit of Will Oldham's recent album "Master and Everyone".

Much like Oldham on that record, Jurado's singing is refined and restrained, but softly piercing within these walls. Minute tone changes and flights of delivery stir feeling in a naturally subtle manner. Jurado could never manage the vocal histrionics of someone like Jeff Buckley or Thom Yorke, but his voice is all the more cogent because of his limitations.

Three of the songs here feature Jurado's close friend Rosie Thomas, also hailing from Seattle, and herself a singer-songwriter of extraordinary talent (her debut album "When We Were Small" is this reviewer's favourite record of 2002 for what it's worth). She sang the magnificent 'Parking Lot' on the "Ghost of David" LP and here lends her stunning voice as a duet partner.

She is most notable on 'Window', an Appalachian folk hymn so pure it could have been written a hundred odd years ago. In the tradition of Southern revivalist Gillian Welch, Thomas' yearning melody offers divine salvation in the wake of death and misery. Her pearly voice again glows bright in the chorus of reflective country ballad 'Omaha', sprinkling a calming mist over Jurado's agitated recollections of life on the American road. Thomas once more sings on 'Matinee', the only upbeat song on the album, complete with brisk acoustics, tickling percussion and group handclaps. Yet even here, there is arguably an underlying sadness, with the inherent longing to be young and carefree again; to savour simple childhood pleasures like seeing an afternoon flick with friends.

There is no escaping sorrow on the album. 'Texas to Ohio', the only loud track, has a cool rock riff and bellowing harmonies but rather than expressing anger or cynicism, let alone joy, Jurado is again weighed down, here by obligation and circumstance. The album closes with the singer at his most despairing on 'Bad Dreams'. The slow, sparse piano and aching violin draw words of remorse and hopelessness forth in a song that is almost unbearably sad.

Damien Jurado draws deep from a very dark and muddy well on "Where Shall You Take Me?" and delivers music of daunting, uncompromising emotion. Songs that are deceptively exquisite slowly threaten to collapse under the weight of the terror, agony and loneliness dwelling within them. Harrowing as it is, music like this deserves not only to be heard but to be cherished by those willing to enter the worried mind of this remarkable songwriter.