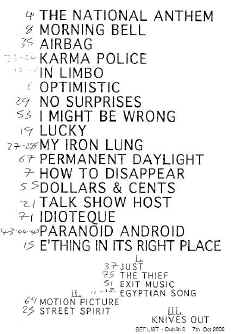 It's funny old world. The last time I saw Radiohead was 3 years ago in what has to be one of the worst mid-sized venues on the European touring circuit. It was the 'Foret National' in Brussels, a cavernous, ugly, spirit-draining venue that it would actually make you thankful for the Point Depot. But at that gig Radiohead, who were touring 'OK Computer', transcended the venue and its many faults with an astonishing performance. So I approached the gig in Punchestown secure in the knowledge that here was a band well-versed in rendering redundant the barriers presented by a cavernous venue. Sure, it was foregone conclusion that they'd conquer Punchestown, was it not? Especially considering the venue was some massive tent thing they had built to their own cantankerous specifications? Uh, not quite.

Not wanting to sound too hackneyed but Radiohead's music - be it in a live context or on your headphones - is often as emotionally involving as anything the rock format has tendered. But not tonight. I for one just couldn't get into it. Yeah, the new 'Kid A' stuff is a bit derivative and anything but obvious and may have formed about one third of the set here. Even so there were many compelling moments but - and here's the crunch - it all just didn't fit together as before. Okay, I grant it that the band played with conviction and, yes, some individual tracks were particularly intoxicating ('Paranoid Android' and 'Street Spirit' come to mind) but it soon became evident that the parts just weren't going to add up to some glorious whole as they had in the past.

The venue I can't help but think was part of the reason. With this flash custom-built mega-tent Radiohead may no longer have to whinge about looking at corporate logos when performing but, while pursuing their ideals, some fundamentals from the punters' point of view seem to have been forgotten. (Let the twenty-something moan begin...) For starters I couldn't see a bleedin' thing. At least not without putting my rather underdeveloped calf muscles through all sorts of hellish strain in order to raise myself an inch or two on my tip-toes. Now at 5'10" I'm no giant but certainly no dwarf either but that stage was, let's face it, desperately low. Basically if you were not one of the 2500 who managed to get into the mosh pit you were relegated to a night of frustrating glimpses through the usual spinning arms and 6'2" view-blocking-skulls while all sorts of lactic acid built up in your leg muscles. Now yeah I know there were some TV screens for those down the back, yadda yadda, yadda. But 3 pretty small projection screens a great concert do not make. And sure (here it comes, the most desperately uncool comment of the week) couldn't Thom and the lads have slapped in a couple of rows of tiered seats around the sides and down the back for those with small calf muscles? Or at least have raised the stage a few feet? Apparently not and as a result I and, it would appear, a few thousand others coughed up £32 for a night that has instantly been relegated to the division of 'Why did I bother?'.

And do you know what? I'm now thinking the Point Depot and the Foret National in Brussels may actually have more redeeming features than I had ever given them credit for in the past. It is indeed a funny old world. Rant over.

Check out Niamh's rather different take on Radiohead in Punchestown