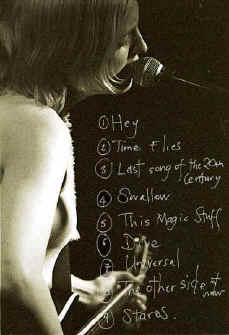 Without a band, Nina took the bare stage and filled it with comfortable confidence and the thick, cozy expressions coming from her wonderfully soothing and beautifully intense voice.

It's very fresh to see an artist on stage that belongs on stage, totally natural in their environment. From the very first note, you were locked in until that sonic movie was over with the credits rolling.

It was simply captivating, from the smooth layering of her multiple guitars, to the pre-recorded electronic loops (and let me tell you, tasty loops they where, and far from the Japanese culture of karaoke - well done Nina) from her CD player sitting on a stool next too her.

A ghostly track called "Dive" put her over the top in conquering the room with music fans that had never heard of her, prior to this night. And that right there, is what its all about in spreading the love.

Nina is always welcome in the "indie" city. With open arms.

Check out a CLUAS feature article on Nina Hynes